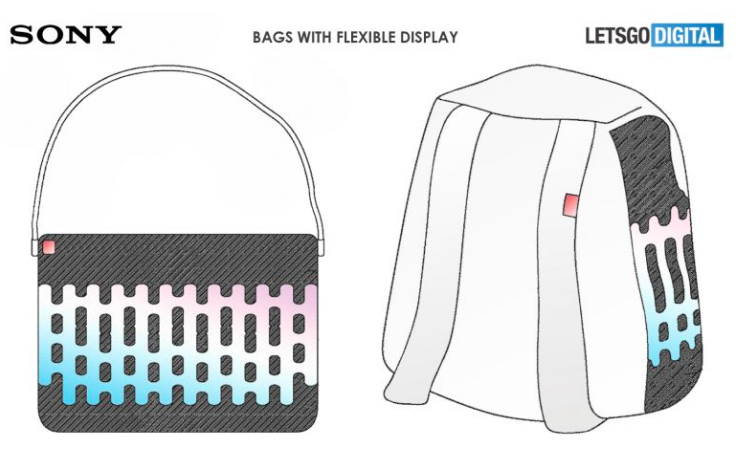 The race among consumer electronics giants to develop all manner of screens that flex and fold — and to attach them to phones, tablets and more — is starting to get a bit extreme.

We saw over the past 24 hours, for example, the results of Samsung rushing to be the first with a foldable smartphone, with reports from several high-profile reviewers and journalists that their Galaxy Folds easily broke after just a day of usage. We’ve also covered myriad plans and patents from other tech companies that likewise want to rush into the flexible game, and now along comes Sony with a patent for a flexible display that can be attached to a bag — like a handbag, or backpack.

Ladies and gentleman, we’ve either reached peak flexible display or are very close to it.

The Sony patent, published towards the end of March, was spotted by Dutch tech news blog LetsGoDigital, which reports that it depicts a bag with a flexible display module. The display also uses the same kind of “electronic paper” screen found in e-readers, which tends to require less power and background lighting. It’s also thinner and more flexible than a typical LCD display.

In terms of other aspects of the design, the bag is shown including a switch that can either be a button or a slider. It would allow the user to change what’s shown on the display.

The design also calls for both an “automatic” and “manual” mode, which are exactly what those suggest. Those would control what’s shown on the display. Additionally, the screen connects to the bag through multiple removable contact points, so you can use the bag for, you know, things that don’t involve screens.

As the LetsGoDigital report notes, this is not the first example of a bag with a display. Last year, for example, the Pix backpack was released that showed animated patterns on it. Whether or not Sony ever does anything with this patent, meanwhile, it does serve as one more reminder that we’re going to start seeing flexible screens pretty much everywhere now, even if manufacturers don’t totally know what to do with them yet.