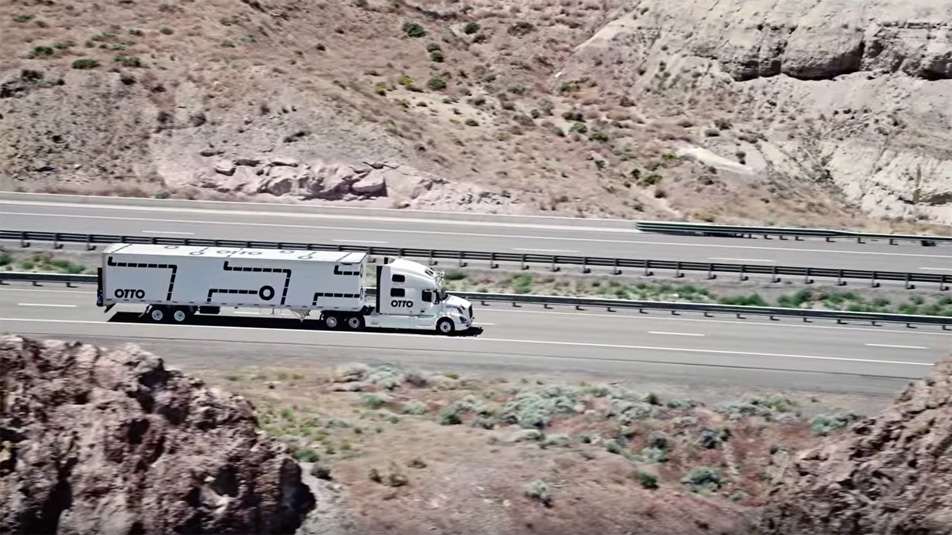 For ex-Googler Lior Ron, long-haul big rigs might seem like an unlikely next step in a career that’s so far included stints as an Israeli Army CTO and serving as a product lead for Google Maps.

His latest professional turn involves helping fit some of the 4.3 million trucks on U.S. roadways with the technology kits his new startup Otto is developing that can turn those hulking rigs into completely autonomous trucks. Because while commercial trucks may be something of an unsexy progression coming from software engineering at a place like Google, they nevertheless represent a potent technology challenge for the team at Otto, a young startup with abundant ambition that operates out of a space in San Francisco’s SoMa neighborhood.

Besides Ron, Otto’s co-founders also include Anthony Levandowski, a tinkerer long fascinated by robots who built a self-driving motorcycle now housed at the Smithsonian for the 2004 DARPA Grand Challenge. He was also a co-founder and technical lead for Google’s self-driving car project.

The rest of Otto’s 40-strong team comes from companies like Google, Tesla and Apple. It’s a contingent of talent racing toward the same autonomous future that big tech companies want to hasten with their myriad self-driving car efforts.

It’s just that Otto — named partly after the German engineer Nikolaus Otto who developed the internal combustion engine — has a quite literally bigger target in mind: No less than full autonomy for big commercial trucks as a means of saving lives and the environment, among other benefits.

And it’s coming, Ron promises. He doesn’t known when, but it’ll be soon – and the arrival of that full autonomy, he insists, is all but inevitable.

“Computers at the end of the day can perceive better, calculate faster, react faster – which means at the end of the day they can drive safer,” Ron said, rattling off safety stats based on 2014 data that includes more than 211,000 combination truck crashes that year. “And once it’s in that safety level and we can show that the truck can drive safer than a human being, then the technology should be deployed at scale in society.

“(At Otto) we’re progressing with the highest urgency. This shouldn’t be a long-term exercise. I’ll be very disappointed if we talk again in four or five years and we don’t have these trucks driving safely on the road.

Safely, of course, being the operative word, at a time when concern has mounted over autonomous driving technology thanks to a recent Tesla fatality. Ron, though, insists the data is on Otto’s side.

Where Otto breaks ranks with some supporters of semi-autonomous driving technology — where humans, essentially, can take the wheel if needed — is in Otto’s insistence that it’s safer for humans not to be involved at all. If a driver isn’t actively engaged in the act of driving, Otto believes that driver shouldn’t be expected to jump on the wheel with possibly a split-second’s warning, Ron said.

Otto is still relatively new, having launched out of stealth in May. Ron and Levandowski left Google in January to start the company.

Companies like Otto, while they may not necessarily attract the buzz of a flashier names like Tesla, are nevertheless important and just as worth watching for their own reasons. One of them is the necessary practicality they bring to the industry’s bleeding edge.

While consumers may lust after their own sleek self-driving car and anticipate they day those fill city streets, for example, rigs equipped with Otto’s kits may get here a lot sooner, helping push autonomy along while consumers wait for other use cases to materialize.

So far, Otto has outfitted four trucks with its kit and has been testing the self-driving capabilities on highways in California. Otto’s technology includes sensors it’s built that sit on top of the truck, in addition to self-driving software.

The company says its in-truck computer system and software are able to executive real-time driving decisions based on readings from the sensors.

All told, it’s a big, wide-open space that Otto is playing in. Commercial trucking, according to the company, is a $700 billion market in the U.S.

“We’ve been at this for the past five months, really driving with urgency and building the team,” Ron said. “We’re very focused on building a team of the best and brightest. As far as the trucks and roadmap, we have four trucks now driving on different roads, and we’re in the process of expanding the testing to more and more highways. We’re also testing with different lighting conditions, different weather conditions, different obstacle conditions – really starting to chip away at all the other things that come next.”