Apple and Samsung devices (and washing machines!) have started going boom with slightly worrying regularity, all because of the sometimes-unstable power source lingering inside. Here’s how to keep your lithium-ion-using device at a safe and non-explosive temperature.

From a scientific point of view, the fact that lithium-ion batteries can explode really isn’t a surprise. Cellphone and laptop batteries have been intermittently catching fire, swelling up or exploding for decades.

The reason is simple: batteries store energy, and while most of the time, that energy is turned into dank memes or FaceTime calls, when things go wrong, it can turn into flames. It’s the same thing as a car’s tank of gas: when everything goes properly, the energy is released gradually and safely by the engine, which makes the wheels go round and round. But when there’s a leak or a fire or a crash, the entire tank of gas can go up at once.

Pictured: a car fire caused by a charging Note 7 in Florida

Of course, regulators and companies have known about the dangers of lithium batteries ever since they were first introduced, and in theory, every battery sold today should not fail under ideal circumstances. But accidents happen, so let’s take a look at how and why lithium-ion batteries can go boom.

Assuming a battery is properly and safely manufactured, the most common cause of a fire or explosion is physical damage. If a battery is badly dropped — or worse, penetrated with a sharp object — it can cause a short circuit inside one cell. That will lead to energy flow between the positive and negative elements of the cell, causing “thermal runaway,” and quite possibly a fire.

One cell heating up dramatically can also cause a chain reaction inside the entire battery, leading each cell in turn to heat up and vent. In practice, this looks less like an explosion and more like a quick and violent fire.

So, simple solution: don’t stick nails into your phone! Less obviously, you should be cautious with a device after it’s suffered any kind of physical damage. If your phone or tablet takes a big tumble, monitor it for signs of damage like the battery not holding charge, the device getting unusually hot, or the batteries swelling in any way.

That covers physical damage. But what about the dozens of Samsung devices that have recently been exploding with no damage?

From the information Samsung has released, it’s a similar kind of fault as physical damage, but due to a flaw in the manufacturing process. For some reason, cells were manufacturered with the positive and negative terminals too close to one another. That causes excessive heat within the battery, especially during charging or use in a particularly hot place. Combine those factors, and you have a perfect recipe for thermal runaway.

But why did Samsung screw up so badly? The big-picture reason is really to do with lithium-ion battery technology, and consumers’ demand for better battery life. The battery chemistry of lithium-ion cells hasn’t changed that much over the last decade, but consumers have been clamouring for better battery life. So, in an effort to cram more energy into the same-sized battery, manufacturers have been pushing tolerances more and more, meaning that one tiny error in the manufacturing process can have huge effects.

If you have an affected Samsung Galaxy Note 7, the easiest way to prevent it from exploding is to go trade it in for a new, non-explosive device. In the interim, you should avoid charging your phone all the way (Samsung has even released a software patch that will do just that), and avoid charging or using it in warm places (sorry, Florida). 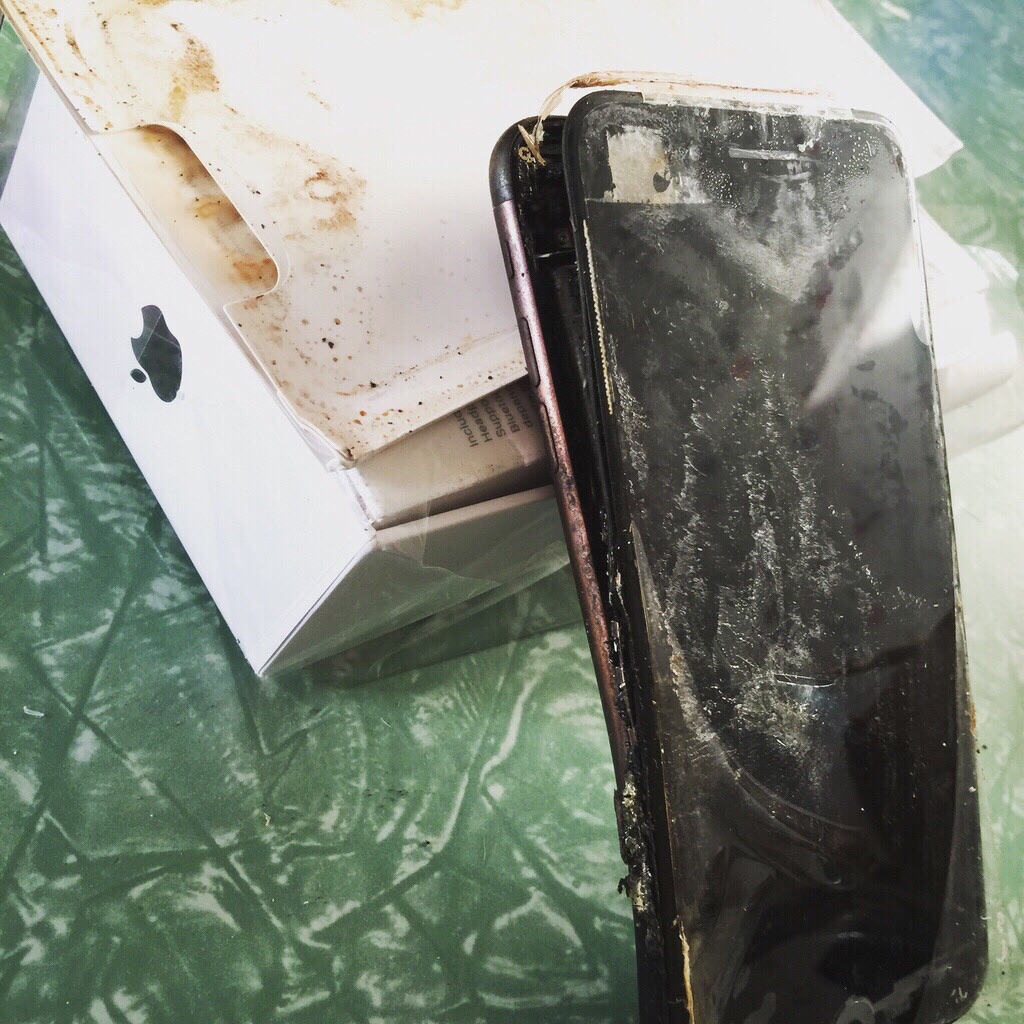 iPhone 7 that apparently came out of the box pre-exploded

But it’s not just Samsung devices that have been exploding. A story is going around today about an iPhone 7 that appeared to explode. According to the user, he opened the box of a brand-new iPhone, and it looked like this. We don’t know precisely what happened yet, but a decent guess would be the box was left somewhere too hot, which could cause the battery to overheat and go boom.

Although batteries are safe in general (far safer than driving in a car, for example!), there’s still a few precautions you can take to avoid spontaneous combustion: