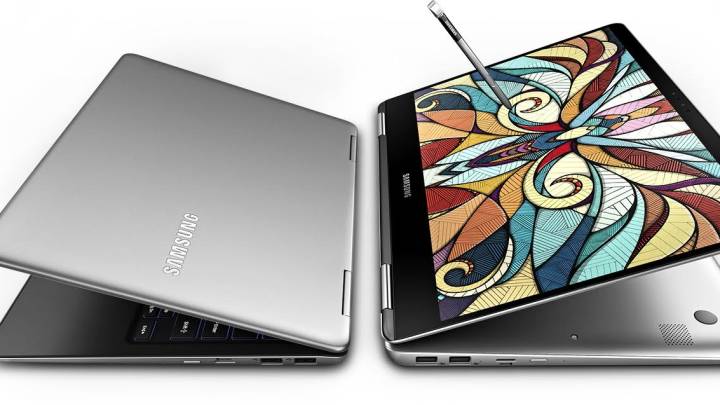 There’s two new designs emerging for touchscreen laptops these days: the tablet-first form factor, like Microsoft’s Surface, which has all the guts in a single tablet with an optional add-on keyboard; and the more traditional laptop style, but with a 360-degree swivel hinge.

The Surface style tends to pSush the touchscreen and a stylus more, while the convertible design has the touchscreen as an afterthought. But Samsung doesn’t seem to have got the memo that laptops should choose between one style or the other.

The Notebook 9 Pro is Samsung’s latest do-it-all laptop. It comes in 13-inch and 15-inch versions, and has a 360-degree hinge so it can flip around and become a heavy tablet. There’s also a built-in S Pen stylus with pressure sensitivity, which should help with drawing and sketching, or just signing documents.

The internals are what actually make this laptop stand out, though. Both versions come with a 7th-gen Intel Core i7 as standard, which is a major upgrade from the Core i5 that normally comes as stock. 8GB of RAM in the 13-inch version should be sufficient, if not over the top. If you need more power, the 15-inch version has 16GB of RAM and an AMD Radeon 540 discrete graphics card, meaning it should handle Photoshop or light gaming with aplomb.

One thing that seems a little off is the 1080p display on the 13-inch version. Usually, premium convertible laptops with powerful processors ship with higher-resolution displays. But I’m actually happy that Samsung has stuck with a lower-res Full HD screen here — a 13-inch screen isn’t big enough to get the benefit of higher resolution, and the less pixel-dense screen should help with battery life.

The only big question is price. A Core i7, stylus and magic flipping hinge aren’t going to come cheap, and if the price goes as high as $1,500, it’s dangerously close to MacBook Pro territory. But if Samsung can undercut Apple by a little, I could see this being a strong candidate for people who want a powerful laptop with just a hint of touchscreen capability.