Talk about timing… News just hit that an airplane had to be evacuated when a Samsung Galaxy Note 7 exploded and began smoking while aboard the aircraft. Making matters even worse — much, much worse — is the news that the Note 7 device in question was apparently a “safe” model that was manufactured recently and was issued to a customer as a replacement phone. In other words, if this report pans out, not even Samsung’s new replacement phones are safe to use. As if Samsung’s headache wasn’t bad enough, its smartphone rival out of South Korea has been using Samsung’s misfortune to help peddle its own phones.

LG has been battling its Korean rival in the smartphone market for years, often to no avail. The company does manage to sell several million handsets each quarter, but it hasn’t yet figured out how to consistently make a meaningful profit by selling phones. While many industry watchers believe Apple will be the biggest beneficiary from Samsung’s Galaxy Note 7 debacle as consumers opt for the iPhone 7 and iPhone 7 Plus instead of Samsung’s potentially dangerous Note 7, LG wants in on the action, too.

According to NDTV, LG has been sending out marketing texts in India advising consumers to avoid Samsung’s “exploding products” and buy an LG phone instead. The messages, which are reportedly being sent to wireless subscribers all over the country, assure users that LG’s products are thoroughly tested in order to ensure people’s safety.

“Heard the news of exploding products? At LG, our products go through multiple tests to ensure safety of our most valuable asset – YOU,” the marketing SMS from LG reads. “Have a safe Diwali with LG.” 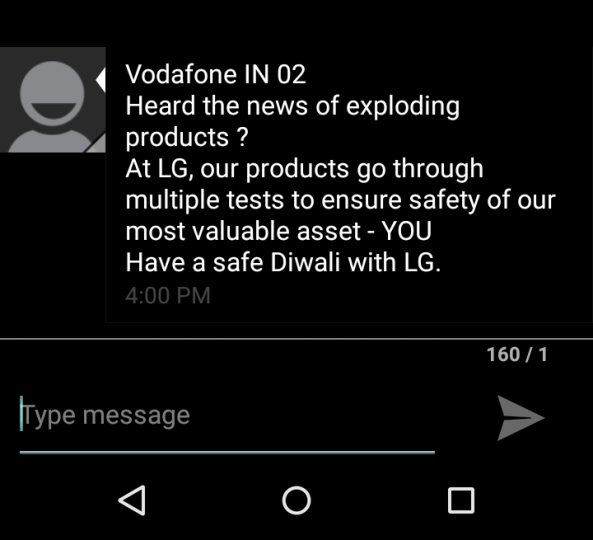