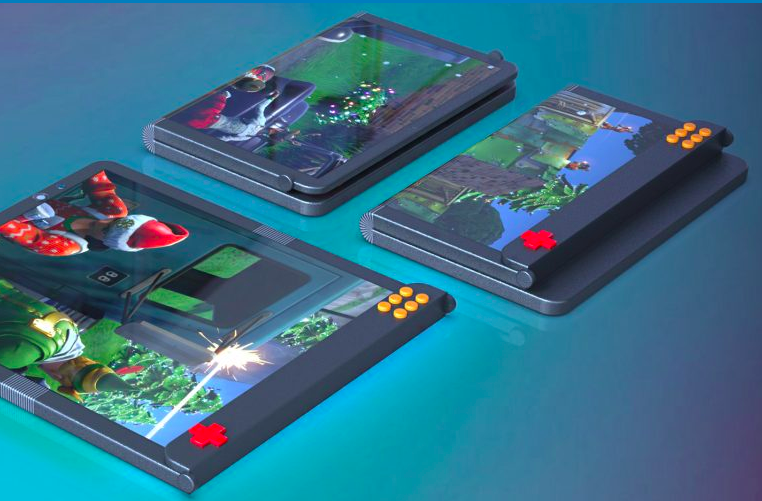 We’re still a few weeks out from the long-awaited reveal of Samsung’s foldable phone, and we have some fresh details to share that have just leaked about Samsung’s bendy phone game plan. Except, well, we’re not actually talking about that foldable phone, though — turns out, the dedicated gaming phone we first heard about last year that Samsung has been working on is seemingly going to be yet another foldable device, one that’s separate from the foldable Galaxy phone Samsung has been hoping will usher in a new chapter for the handset industry.

Courtesy of Dutch blog LetsGoDigital, the US Patent and Trademark Office has just published a design patent that shows a foldable phone with dedicated gaming buttons which can be hidden when not in use. The site, which prepared some renderings you can see attached to this post, also stresses that this gaming phone is not the same thing as the Galaxy Fold that’s expected to be unveiled in a few weeks.

We started telling you about Samsung’s apparent plans along these lines last year, when it was becoming clear that the South Korea-based giant wanted to get in on the trend of Android gaming phones started by Razer. Such phones involve features like a custom processor, a special cooling system and perhaps a dedicated gamepad to all power an optimal gaming experience. With that in mind, here are some more details about this apparently forthcoming foldable gaming phone from Samsung.

Per LetsGoDigital and as you can see in the sketches above, when you fold this handset the display will be on the outside. However, look closely at those two sketches at the top of the above infographic. When the device is folded, you can then bend a small part of the screen back that will apparently cause the gaming buttons to appear. You can also see that a D-pad is situated on the left-hand side, while six small buttons are visible on the right.

Again, the color rendering we’ve included with this post comes via LetsGoDigital based on the newly published patent documentation, with the blog adding that it’s not yet clear when this new device will be launched — while of course we’re expecting the Galaxy Fold smartphone to arrive later this month at Samsung’s Unpacked 2019 event. Samsung, If anything, this shows that Samsung is definitely serious about flexibility as a form factor, so it will be interesting to see what the company eventually says along these lines about a gaming phone.