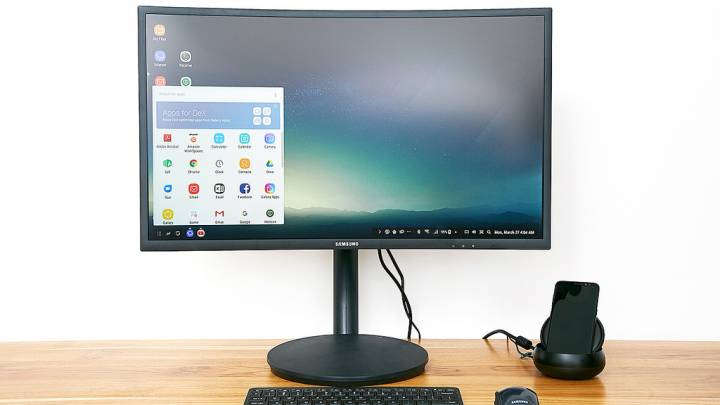 Don’t get too excited about installing Windows 10 on the Galaxy S8 just yet, although you can run a virtualized Windows 10 desktop on the phone using the DeX accessory seen in the image above. However, the powerful Qualcomm Snapdragon 835 platform that powers Samsung’s phone will also power Windows 10 devices later this year. The chipmaker confirmed that Windows 10 devices based on the Snapdragon 835 system-on-a-chip (SoC) will be available in stores in the fourth quarter.

“Our Snapdragon 835 is expanding into mobile PC designs running Windows 10, which are scheduled to launch in the fourth calendar quarter this year,” Qualcomm CEO Steve Mollenkopf said during the company’s Q2 earnings call on Thursday.

That’s hardly a surprise, ZDNet explains, as Microsoft and Qualcomm announced last December that always-on cellular Windows 10 PCs based on ARM chips will be launched this year. But this is the first time either company announced a launch timeframe for these devices.

The Snapdragon 835 chip will run full Windows 10 desktop compiled natively for ARM SoCs. These devices will support both universal Windows apps as well as Win32 apps (via an emulator).

Qualcomm wants to bring some smartphone technologies made possible by the new chip to Windows 10 PCs, including Gigabit LTE and battery-saving tech to Windows 10 devices that will be ultralight, and always connected to a network.

This is certainly an exciting announcement for the future of the PC, and Intel should be worried. The Snapdragon 835 is the fastest chip in town when it comes to Android devices, and next generations will be even faster and more energy efficient. Sure, they won’t serve the needs of “Pro” users who need plenty of computing power, but they’ll be great for mobile computing.

And if Qualcomm is already confident its ARM chips can power PC experiences, then there’s one other reason to be excited. If there’s one rival Qualcomm can’t beat in mobile chips performance, it’s Apple. There’s one rumor that keeps coming back saying Apple is working on its own ARM-based Macs. The more advanced its A-series chip get, the more likely it is to see such devices — don’t get too excited about Macs running on A11 chips just yet.

It’s unclear at this time who’s making these Qualcomm 835 Windows 10 PCs, but we’ll probably learn more details in the second half of the year.