If you’ve ever seen MSNBC’s Lockup or the oft-overlooked Investigative Reports series on A&E, you’ve undoubtedly seen how enterprising prisoners often come up with ingenious ways to sneak in or build items they’re forbidden from possessing. Whether it’s creating jailhouse alcohol or fashioning deadly weapons from seemingly benign objects, I’ve long been fascinated by the resourcefulness of prisoners who manage to seemingly create something out of nothing.

In a story that has only recently been made public, two inmates locked up at the Marion Correctional Institution in Ohio set a new bar for prison ingenuity after officials discovered a functioning and networked PC hidden in the ceiling of a training room the inmates worked in. According to a report from the BBC, the inmates were able to build the PC by using old computer parts they were responsible for recycling as part of a prison work program. Ultimately, they managed to get on the prison’s network.

Upon discovering the PC, authorities found that it was filled with adult-oriented materials, hacking tutorials and how-to guides for making items like drugs and explosives. Additionally, the inmates were able to access sensitive records of other prisoners and even went so far as to file fake tax returns and create fraudulent security passes.

Interestingly enough, the makeshift PC was only discovered after the prison’s IT staff noted an excessive and suspicious amount of web activity coming from a prison contractor’s account.

On 3 July 2015, an email alert told IT staff that the daily internet threshold for a user account had been exceeded. But that account belonged to a contractor who was not scheduled to work on the day in question.

The mysterious user had tried to access certain file-sharing sites but had been blocked by the prison network’s proxy server, which denies access to certain online content. The user “then spent the next three hours straight trying to find sites that would circumvent the proxy and our policies,” an email to IT employees noted.

The unusual activity naturally led to an investigation which eventually ended at the aforementioned training room. There, investigators spotted a network cable snaking up into the ceiling, as evidenced by the photo below. 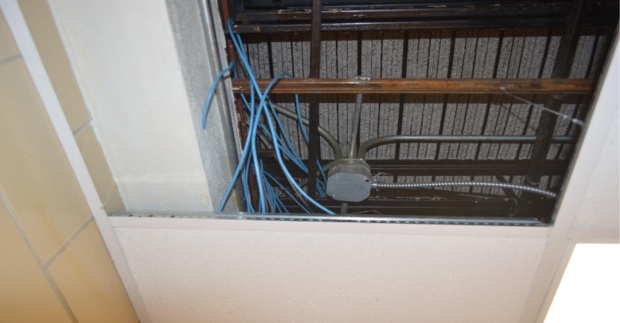 In a statement on the matter, the Ohio Department of Rehabilitation and Correction said that they “will thoroughly review the reports and take any additional steps necessary to prevent these types of things from happening again.”