At a private event in Seattle today, Amazon released some updates to its product lineup. Some things — like a revamped Fire TV stick — were expected. But there was also a sprinkling of unusual and downright weird new products sprinkled in. Luckily, we put together this handy cut-out-and-keep spotters’ guide to everything Amazon wants your money for.

First off, there’s a new Amazon Echo. It’s a little shorter, has a changeable cloth shell, and a dedicated bass tweeter. Most importantly, it has a new price: $99 for one, or $250 for a set of three. Amazon is positioning the new Echo as the answer to a cheap, decent-sounding multi-room audio setup. It’s available from your favorite online retailer today.

It’s also a noticeable shot across the bows for Apple and Sonos. Apple’s HomePod is expected to come out late this year or early next, and Apple took pains to stress its speaker-like capabilities when it announced it earlier this year. The HomePod costs $350, however, which means you could buy three new Alexas for the price of one HomePod, and have enough left over to put a downpayment on an iPhone X.

Echo devices are also getting the ability to make phone calls to any number in the US or Canada for free, which should have landline providers a little worried. Amazon is also catering to existing landline owners with the Echo Connect, a $35 box that connects to your existing landline, and lets you make and receive phone calls on your Echo. It seems like a stop-gap solution to turn the Echo into a basic speakerphone for now, while Amazon is presumably working on a better VOIP system behind the scenes.

Amazon isn’t stopping at a new mainstream Echo, either. The Echo Plus is the big brother of the group. It’s taller than the new Echo, about the same size as the original. It has smarthome hub capability built in, and Amazon is stressing that this is the smarthome accessory for people who hate setup. In theory, it will work with 100+ smarthome devices out of the box, with no app setup necessary — it can control everything over voice. You simply say “Alexa, discover devices.” It costs $149, and that price includes a single white Philips Hue bulb.

Hand in hand with the Echo Plus is a number of new Alexa features for smart homes. You can add multi-action “routines” to a single voice cue — for example, “Alexa, good morning” might turn the lights on, turn the TV to morning news, and activate the kettle.

Implicit targeting is a feature that will let Alexa devices use context to understand commands. For example, addressing the Alexa in the living room with “Alexa, turn on the lights” will just turn on the living-room lights.

Not enough Echo variety for you yet? Amazon has another new Echo, the Echo Spot. It’s vaguely alarm clock-shaped, and has a 2.5-inch circular screen, and supports video calls. Because, y’know, most people prefer calling people from a cheap 2.5-inch screen than the 5-inch smartphone they carry with them everywhere. It will cost $129 when it comes in December.

We mentioned that Amazon has some weird new products, and there’s no better example than Echo buttons. They’re internet-connected buttons that don’t really seem to have any purpose yet — Amazon’s best example was using them as buzzers during family board game night. Presumably, developers are going to have a field day with these. 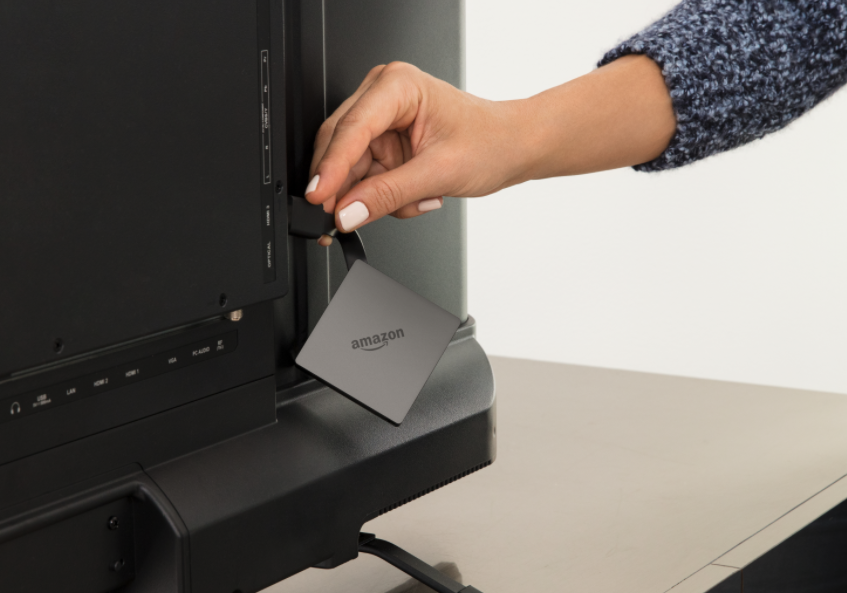 Just after Apple announced a 4K , Amazon is right there with a new Fire TV dongle. It now supports 4K video and HDR, much like the new . Specs-wise, it’s got a 1.5GHz quad-core processor, 802.11ac Wi-Fi, and it ships with an Alexa voice remote.

Unlike the new (or the most expensive Chromecast), it’s only $69, available for pre-order now. Amazon is also adding more video services to the Fire TV, and now includes Hulu, Playstation Vue, NBC, CBS, Showtime, CNBC, Bravo, Netflix, NBC, and Dish.

Alexa will show you things on the heads-up display in BMW vehicles. pic.twitter.com/MPA5oEVsDs

Amazon has partnered up with BMW, and Alexa will be built into all new BMWs starting next year. Using a big tech firm AI for in-car entertainment is nothing new — Apple CarPlay and Android Auto have been around for years — but putting the AI directly into the car, rather than just piggybacking off a mobile device, is something new. It also proves Amazon’s intent to move Alexa way beyond your kitchen.