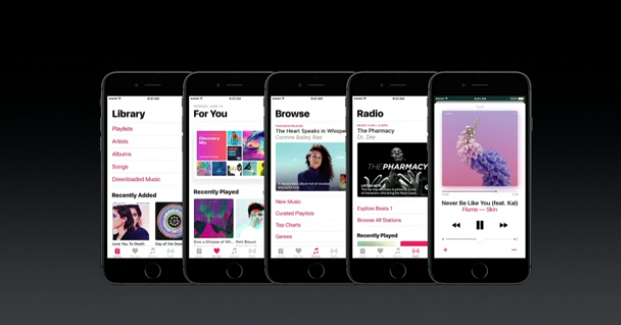 A year after launching a brand-new music app with a brand-new streaming service, Apple is fixing the terrible layout. It’s been a long time coming, but we have a much more streamlined layout that puts the focus back on your music library, not just the Apple Music streaming tunes.

There’s all sorts of new features, but here’s some stuff that jumps out. There’s new curated playlists every day, which is a good middle finger to Spotify’s Discover Weekly playlists. Not sure how personalized they are to the individual, but it showcases the human curation Apple has been pushing with Apple Music.

Lyrics! When demonstrated on stage, it was supposed to allow the audience to “rap to the beat” together. That didn’t go so well, but putting lyrics straight into the Music app is pretty sweet.

Here’s the new landing page when you open the app. If you’re a regular user of the music app, you shouldn’t need words to explain how much better this is than the current layout. For all the Spotify addicts out there, take it from me: this is an app you might actually want to use now, rather than just hiding in a folder forever.

Radio gets a new look as well. Apple is quick to push its Beats 1 radio station, which is “well on the way” to becoming the world’s biggest radio station. There’s also more 24-hour, non-human radio stations, which is good for listening to non-stop music of one particular genre.

There’s more still to be unpacked from the Music app, which we’ll be doing in the coming hours, as soon as we get the developer preview loaded up.