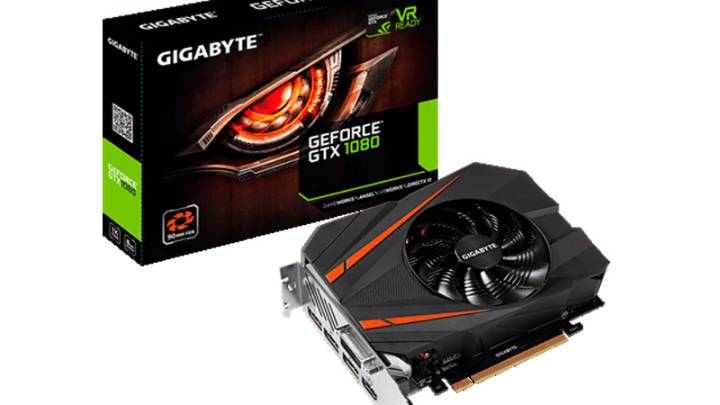 Graphics cards have gradually gotten bigger over time, and when you consider how much more powerful today’s GPUs are than those from even five years ago it makes sense that component manufacturers would need that extra space for heat dissipation, fans, and fins. Longtime third party component house Gigabyte has always been about peak performance, but its newest iteration of the GTX 1080 adds a new bullet point to the company’s long list of talents: miniaturization.

The Gigabyte GTX 1080 Mini ITX 8G is quite a powerful card, boasting the same performance specs as the GTX 1080 Founder’s Edition GPU which, not long ago, was the best gaming graphics card you could buy. But the Mini ITX 8G isn’t just powerful, it’s also (as its name so obviously implies) tiny. This is the cutest little GPU to come along in quite a while. I mean, just look at it:

Don’t you just want to grab it and pinch its cheeks?

But Gigabyte didn’t choose to shrink the GTX 1080 just for fun. The pint-sized GPU is a perfect fit for many compact gaming PC builds, which have become increasingly popular over the past few years, and will match up nicely with a mini-ITX motherboard. Of course, with shrunken size comes the potential for greater heat, and even though Gigabyte boasts about the custom cooling system it developed for the new card, it will be interesting to see how the single 90mm fan manages to keep it cool under maximum load.

If you’re salivating for this little beast I can hardly blame you, but you would be advised to chill out for a bit, as Gigabyte hasn’t actually announced a release date or price for it quite yet.