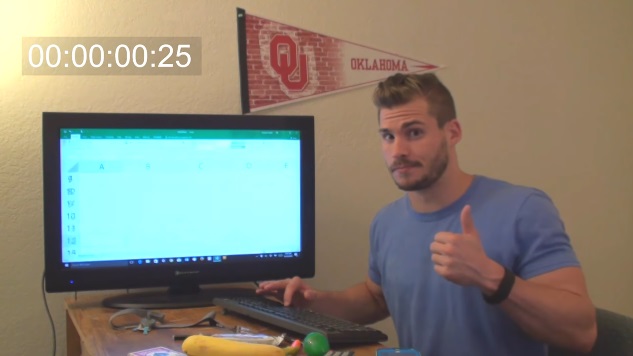 For centuries, mankind has sought answers to some of the universe’s most perplexing and troubling questions. While some of these questions stretch back thousands of years — what is the meaning of life? — the advent of the technological age has ushered in an endless stream of new and equally challenging questions.

As a prime example, we’ve long wondered how long it would it take for someone to manually scroll to the bottom of an Excel spreadsheet. After years of waiting in vain for an answer from Computer Scientists and engineers who apparently had more important things to do, Hunter Hobbs of Oklahoma recently decided to take matters into his own hands.

Armed with nothing more than a computer, a bottle of energy pills and his trusty index finger, Hobbs set out to answer the unanswerable. After firing up an Excel spreadsheet, Hobbs pressed the downward arrow key and got his scroll on, blasting through 1,048,576 Excel rows with machine-like determination.

Originally spotted by Vice, Hobbs managed to distill his entire endeavor into a 2.5 minute time-lapse video that’s actually more entertaining that you might otherwise imagine. I mean, we’ve seen people scroll through Microsoft Word documents before, but Excel? Some didn’t think it was even possible.

By the time Hobbs’ fearless experiment was completed, he wasted a total of 9 hours 36 minutes and 10 seconds.

Time well spent if you ask us.