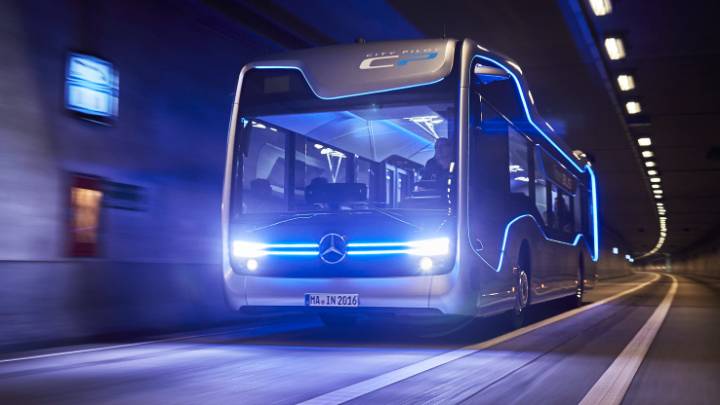 Self-driving cars will be terribly exciting once they’re  ready for mass consumption. Carmakers are still refining the software-hardware combinations that will make driverless cars feasible, while lawmakers are coming up with the required framework that would make such vehicles legal.

But Mercedes-Benz may just have the most exciting driverless bus we’ve ever laid eyes on. And it recently completed a 12-mile tour in Holland, which is a massive achievement for the industry.

Unlike the rather small public transportation vehicles included in other self-driving cars projects, the Mercedes-Benz Future Bus is a full-sized bus, exactly the kind of vehicle you’d expect to drive you around town.

The Future Bus completed successfully a trip of around 12.4 miles in the Netherlands, on a route that connects Amsterdam’s busy Schiphol Airport to the town of Haarlem, TechCrunch reports.

The bus dealt with various “obstacles” along the way, including navigating an urban environment, dealing with tunnels, keeping track of light signals and road signs, and monitoring the road for any changes in the asphalt that would need to be avoided. An onboard camera handles that latter feature, monitoring asphalt detail and comparing it with previous trips to discover any variances.

The bus also handles stops autonomously. It can navigate raised bus stops along the way, and it can pull within two inches from the curb.

The Future Bus can go up to 43 mph, which isn’t bad for such a commute, and can communicate with traffic lights, so it knows when they’re about to change.

Finally, the interior is designed to make the journey as pleasant as possible. The buses have three separate zones designed based on how much time the passenger is supposed to be on board. The interior features a ceiling canopy with a forested canopy, as well as displays that would deliver entertainment and other content.

Mercedes-Benz’ extended presentation of the bus of the future follows in the video below.