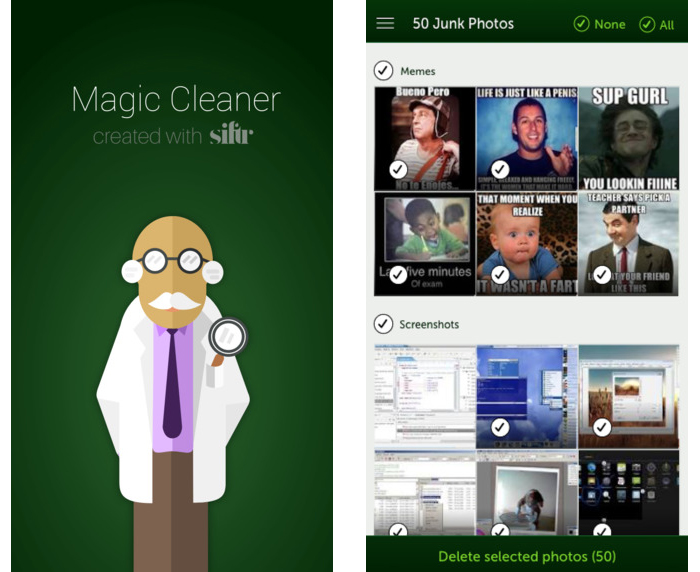 A few weeks ago, I started receiving incessant notifications on my iPhone that my iCloud storage was nearly full.

You won’t be surprised to learn that a vast majority of that storage space was being taken up by photos and videos I hadn’t sorted through in months, so I proceeded to scroll through the list and delete the ones I didn’t want, one at a time.

Had I known about Magic Cleaner, this process would have been much easier.

Magic Cleaner is a free app for iOS and Android that analyzes all of your photos in batches of 500 and sorts them into categories such as Greetings & Memes, Screenshots, Scans, Quotes and Cartoons. Once all your photos have been sorted, you can choose to delete all of the “junk photos” that the app has discovered.

My phone had recently been purged, so I didn’t have too many photos to sort through, but the Doctor Kleen (the app’s mascot) managed to find 44 junk photos during his search through the annals of my phone.

Each and every one of those 44 photos should probably have been deleted the first time around: screenshots (accidental and intentional), receipt scans and funny memes were taking up precious megabytes on my device.

The sorting was less than perfect, with several screenshots slipping into other categories, but not a single actual photo got caught in the app’s algorithm.

So before you start scrolling through your camera roll, trying to pick out every pointless image taking up storage space on your phone, give Magic Cleaner a try.