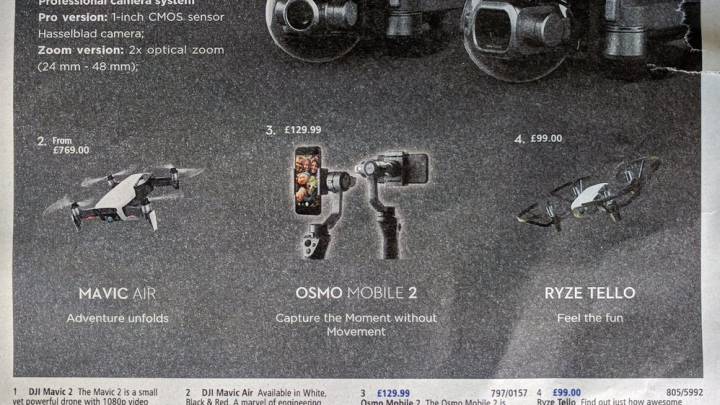 Thanks to an early reveal in the catalog from British retailer Argos, we have an idea of what’s coming spec-wise with the next DJI Mavic drone.

The catalog apparently jumped the gun on running images of the drone that also include technical specifications after DJI scrapped a press event that had been set for July 18. We were supposed to get an announcement at that event about the next model, which the leaked images show will apparently come in two versions — the Zoom and the Pro.

Both versions, among other things, will reportedly have a range of five miles and be able to fly at a top speed of 45 mph. The Zoom will come with a 2x optical zoom lens, while the Pro model will include a Hasselblad camera with a 1-inch sensor. The ability to transmit live 1080p video will be a feature of both models — from up to 5 miles — and both models will also come with 360-degree obstacle avoidance.

According to a statement the BBC obtained from a DJI spokesman, the catalog also only shows a “hint” of what will be on offer with the new drones.

“This pre-printed catalogue was scheduled before we postponed our ‘See the Bigger Picture’ event,” the spokesman continued, adding that the event had been delayed to “ensure we can deliver high-quality, cutting-edge technology to our customers.”

Argos, meanwhile, has acknowledged it only learned about the event’s delay after its new catalogs — which come out every six months — were printed. Some of the most important details, we should note, also don’t appear in the printed ad, such as pricing or a release date.

From the ad itself, per DroneDJ: ““The Mavic 2 is a small yet powerful drone with 1080p video transmission and up to 8km (5 miles) transmission distance and a max speed of 20m/s (45mph). It will turn the sky into your creative canvas. Its compact size and 31-minute max flight time makes this one of DJI’s most sophisticated flying cameras ever. Omnidirectional obstacle sensing with APAS and Active Track 2.0 give you the confidence to take to the sky and capture your moment. Dolly Zoom (zoom version only). DJI Mavic 2 Pro & DJI Mavic 2 Zoom.”