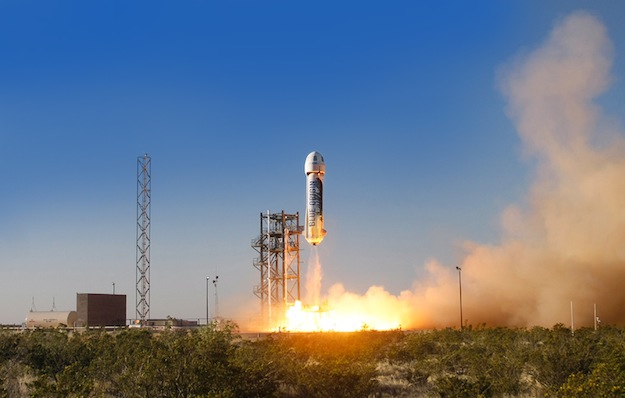 As the CEO of both Tesla and SpaceX, Elon Musk is often regarded as a real-life version of Tony Stark. But truth be told, Musk isn’t the only prominent CEO with two jobs and grand aspirations for space travel. While Jeff Bezos is primarily known as the CEO of Amazon, he’s also the founder of Blue Origin, a privately funded spaceflight services company.

Similar to what Elon Musk is trying to do with SpaceX, Blue Origin is primarily focused on developing technologies that will allow private citizens to travel to space without breaking the bank. And though Blue Origin receives a lot less press than SpaceX, the Jeff Bezos led company this past November launched a rocket about 62 miles up into the atmosphere (the outskirts of space) and successfully managed to land it back on earth in one piece.

At the same time, Bezos has been unusually quiet about providing specific details regarding his company’s long-term plans for space travel. But in 2016, likely emboldened by Blue Origin’s landing successes, Bezos has started to open up a bit more.

In a fascinating and informative piece published in The Washington Post, Bezos for the first time spoke freely and enthusiastically about his vision for commercial space travel.

Hardly an endeavor Bezos is embarking on just for fun, the Amazon CEO’s interest and near-obsession with space can be traced back to his childhood.

“I wanted to start a space company from when I was a little kid, but I never expected to have the resources to do so,” Bezos explained. “Then I won this lottery ticket called Amazon.com. And so when Amazon became a successful company, I realized, ‘Hey, I can actually fulfill my childhood dreams of starting a space company,’ and that’s what I did.”

What’s particularly fascinating is that Bezos’ vision of the future doesn’t just entail humans travelling to space for quick little tourism-oriented trips, but involves, at some point in the future, “millions of people living and working in space.”

While such an idea may admittedly seem far-fetched – if not impossible – Bezos certainly didn’t get to where he is today by dreaming small.

“Our hiring bar is unabashedly extreme,” the page reads. “We insist on keeping our team size small (measured in the dozens), which means that each person occupying a spot must be among the most technically gifted in his or her field. We are building real hardware — not PowerPoint presentations. This must excite you. You must be a builder.”

Make sure to hit the source link below for the full profile on Blue Origin and Bezos’ ideas and grand plans surrounding space travel. For a company that has historically been shrouded in secrecy, the piece provides a tremendous amount of insight into the inner workings and broader goals of Blue Origin.