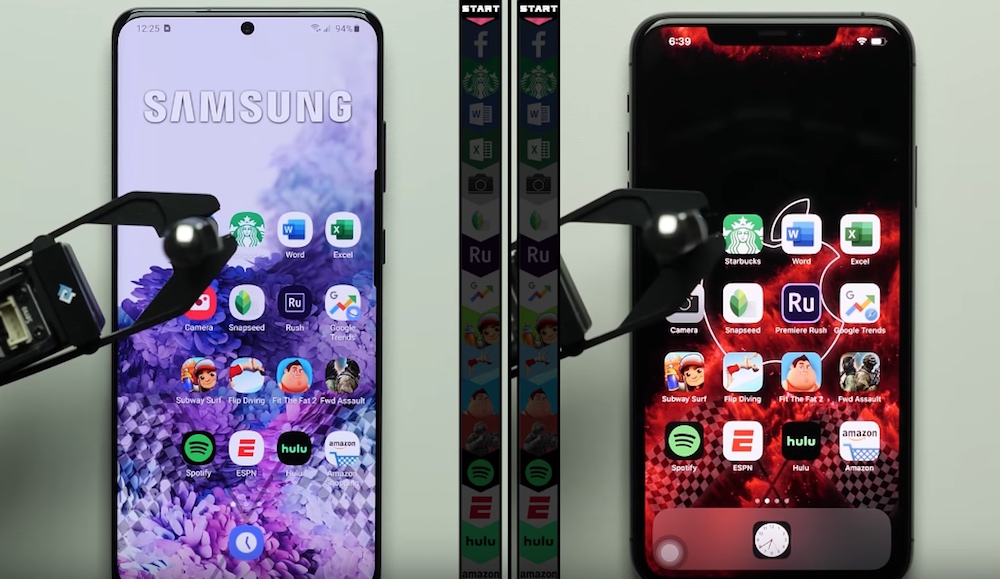 Given that the modern-day smartphone market is nearly 13 years old at this point, It’s a bit funny that we’re still conducting speed tests with the top smartphones on the market. After all, whether you’re a hardened Android user or partial to the iPhone, the reality is that any flagship you buy today offers up performance that was simply unheard of even a few years ago. Suffice it to say, it’s hard to imagine a scenario where someone plunks down money for a new iPhone or Android device and subsequently complains about sluggish performance.

Still, there can only be one king and, perhaps out of sheer curiosity alone, the public often demands to know which smartphone stands out above all the rest. In light of that, the PhoneBuff YouTube channel recently decided to pit an iPhone 11 Pro Max armed with Apple’s A13 Bionic against a Samsung Galaxy S20 Ultra armed with a Snapdragon 865 from Qualcomm. It’s an old-fashioned speed test and we’re here to see which flagship takes the crown this year.

As a quick point of interest, before we get to the test itself, it’s worth noting that the iPhone 11 Pro Max has 4GB of RAM while the Galaxy S20 Ultra has a whopping 16GB of RAM. This, of course, shouldn’t come as much of a surprise given that Apple has always lagged behind in the RAM department.

With that said, it’s time to dive into the test itself. As evidenced by the video below, Samsung’s Galaxy S20 Ultra gets off to an impressive start and manages to accomplish an array of tasks a tad quicker than the iPhone 11 Pro Max. The iPhone 11 Pro Max, however, starts making a comeback and ultimately takes the lead once the task moves to opening up a 500-page document and conducting calculations in Microsoft Excel.

The iPhone 11 Pro Max, however, starts to lose ground once the task turns to photo editing in Snapseed. From task to task, the iPhone 11 Pro Max and Galaxy S20 Ultra are truly in a close back-and-forth battle. And while this may seem like par for the course, it’s worth noting that Apple’s flagship iPhone models routinely trounce all Android competitors. In short, the S20 Ultra really delivers in the performance department in a way that previous Samsung Galaxy flagships haven’t.

The iPhone ultimately wins the first lap but the S20 Ultra — bolstered by its 16GB of RAM — manages to open previously opened apps in their previous state slightly better than the iPhone. When the dust settled, Samsung’s S20 Ultra managed to eke out a small but yet significant victory over the iPhone 11 Pro Max by about 10 seconds.

Again, the victory here is somewhat symbolic given that Apple’s iPhone 12 will certainly crush the S20 Ultra when it comes to raw performance. Still, it’s a nice, if not somewhat rare, performance victory for Samsung.