Apple’s growing cash hoard — which now checks in at more than $256 billion — is largely attributable to the iPhone. Sure, Apple was raking in the cash during the iPod era, but the advent of the iPhone quickly transformed Apple into one of the most successful and profitable companies on the planet.

Suffice it to say, if you’re intent on picking up a brand new iPhone model, you’re going to have to pay a pretty penny for it. Interestingly enough, the cost at which you can pick up an iPhone can sometimes vary wildly from country to country. Highlighting this, Deutsche Bank earlier today released a list which maps out how much a brand new iPhone 7 will set you back across 33 different countries.

As to the reasons behind variations in iPhone pricing, that can be attributed to any number of reasons, including currency valuations, local tax laws, and even political climates.

Listed below, via Business Insider, are the 10 countries where picking up a brand new iPhone 7 is the cheapest. Incidentally, the pricing below is for a 128GB iPhone 7.

As for the 10 countries where the iPhone 7 is the most expensive, that lists reads as follows:

The full ranking of how much an iPhone 7 costs in 33 separate countries can be viewed below. 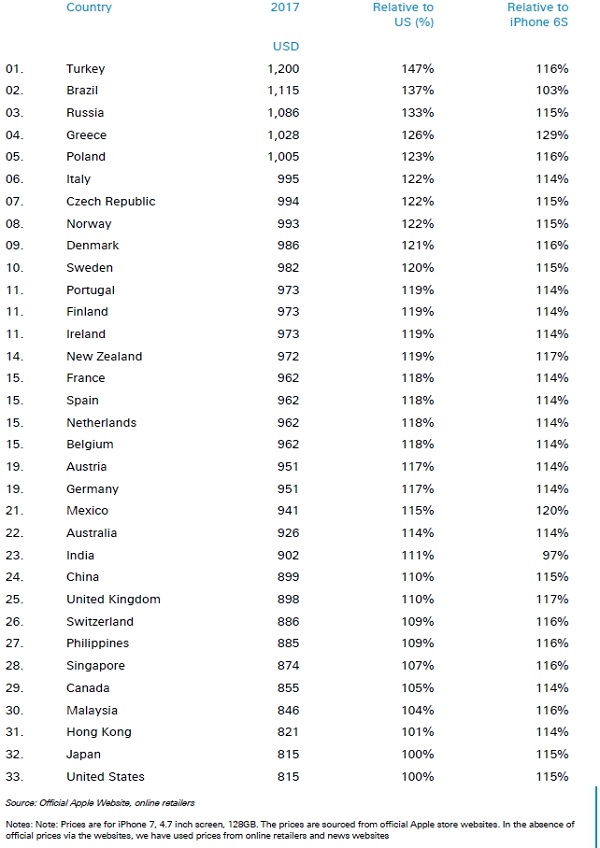