One hesitates to call the iPhone 7 a surprise success but in many ways that’s exactly what it is. While there was never any doubt that Apple’s next-gen smartphone would move millions of units, the narrative that the iPhone 7 was going to be an exceedingly boring device was so pervasive that many were quick to dismiss it as nothing more than a stop-gap measure before Apple introduced the radically redesigned iPhone 8.

In reality, the iPhone 7 has proven to be far more successful than most anticipated. Bolstered by an improved display, blazing fast hardware, and more, customers flocked to the iPhone 7 in droves. What’s more, the iPhone 7 finally delivered long-awaited, if not long-overdue, improvements to overall battery life.

Recently, AnandTech’s in-depth technical review of Apple’s iPhone 7 models confirmed that the devices are some of the fastest smartphones on the market. Not mincing words, the review said that the iPhone 7’s “hardware is unparalleled and a cut above anything else in the industry.”

All of that praise aside, there is one area where the iPhone 7 woefully lags behind the competition — battery charging time. We didn’t get a chance to touch on this earlier, but AnandTech’s iPhone 7 review put Apple’s new devices to the test and found that when it comes to charging the battery, the iPhone has a long ways to go. 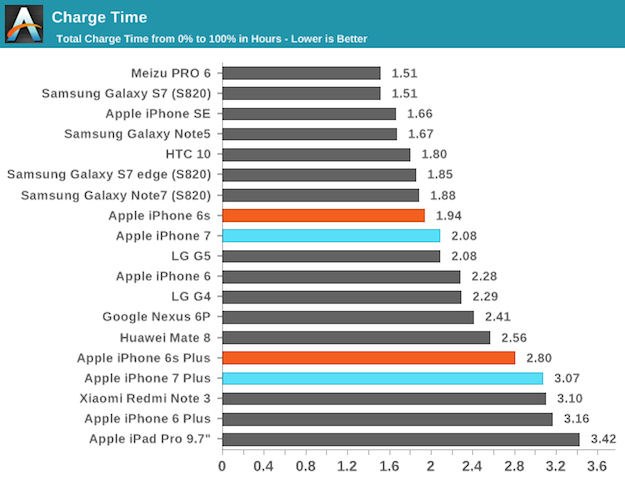 As you can tell from the chart above, Apple’s iPhone 7 models lag way behind devices like the Samsung Galaxy S7, the Note 7 (RIP), and even last year’s iPhone 6s. The iPhone 7 Plus in particular takes a little over 3 hours to reach a 100% charge. Meanwhile, Samsung’s flagship S7 needs only about an hour and a half.

We’ve heard rumors of Apple incorporating fast-charging technology into the iPhone for quite some time now. The chart above simply underscores how helpful such a feature would be.

Tweet
The battery in a Samsung phone burst in our office, and it wasn’t a Note 7