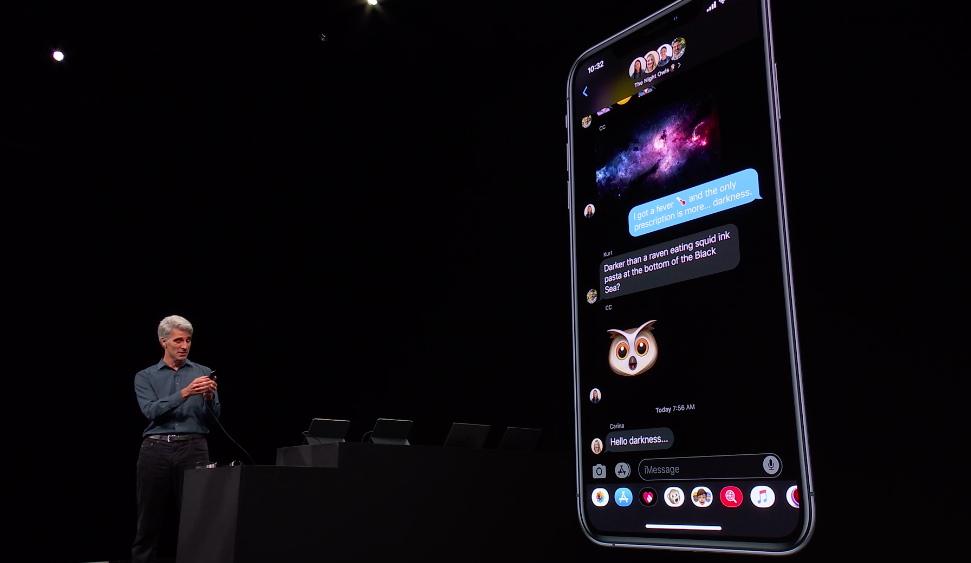 One of the more highly anticipated iterations of Apple’s annual developers conference is underway this morning in San Jose, California, with this year’s WWDC giving Apple the opportunity to show off everything from new software for all of its major platforms — in addition to offering up some surprises. Like the news, leaked right before the start of Monday’s event, that Apple is going to split iOS essentially in half and formulating a new version specific to the iPad.

The company just showed off iOS 13 on stage, which — it’s now official — will include the much-anticipated dark mode feature.

When the new version of the iPhone maker’s mobile operating system arrives this fall, you’ll be able to switch the native design and color scheme to a darker mode that doesn’t strain your eyes as much. Apps like News, Maps and even the mobile keyboard will be switchable to the forthcoming dark mode, according to a presentation this morning from Apple senior vice president of software engineering Craig Federighi.

One new ios 13 feature that got an especially enthusiastic reaction from the crowd in San Jose is “Sign in with Apple,” which lets you sign in to an app without inadvertently opening the door to those apps quietly accessing your personal data. You can even choose to hide your email from the app when it asks for your email.

Apple proves yet again that they care about privacy with “Sign In With Apple.” Not the same can be said about *cough* the other peeps. pic.twitter.com/5lCrSotJTc

When you choose to hide your email, Apple will in that case actually create a randomized email address that forwards information to your actual email account. It’s important to point out — apps will need to enable “Sign in with Apple” support, and Apple allowing customers to stay a little more anonymous might mean some (or many?) apps may not want to give up being able to access the customer data they want. Stay tuned on that front.

Other new features coming to iOS 13 include the ability to have separate iCloud accounts for your work and personal lives, as well as the iPhone automatically sending unknown and possible spam callers to voicemail.

Here are some of the other new features coming, as mentioned by Apple in a news release following today’s keynote: