For quite some time now, it’s largely been accepted as fact that innovation in the HDTV space had hit an insurmountable ceiling. With ultra-thin 4K displays delivering incredible picture quality at remarkably low prices, it was hard to fathom what the future of TV watching would entail, or if it would even be markedly different from what it is today.

But as the famous Steve Jobs quote goes: The best way to predict the future is to invent it. Apple may not have figured out how to re-invent the HDTV, but the same can’t be said for Panasonic.

Following up on a product that they initially introduced at CES this year, Panasonic this week demoed what effectively amounts to an invisible TV. By employing an HDTV with an OLED panel instead of an LED screen, Panasonic managed to create an HDTV that, when turned off, is completely transparent. Whereas early incarnations of Panasonic’s futuristic TV delivered a somewhat dull picture, Pansonic’s engineers have been hard at work to ensure that the new picture quality is as bright, vivid and crisp as what you’d find from any other set on the market.

As you can tell below, the TV when turned off (pictured to the right) is essentially nothing more than a transparent piece of glass. It

When turned on, it operates just as any other HDTV would. 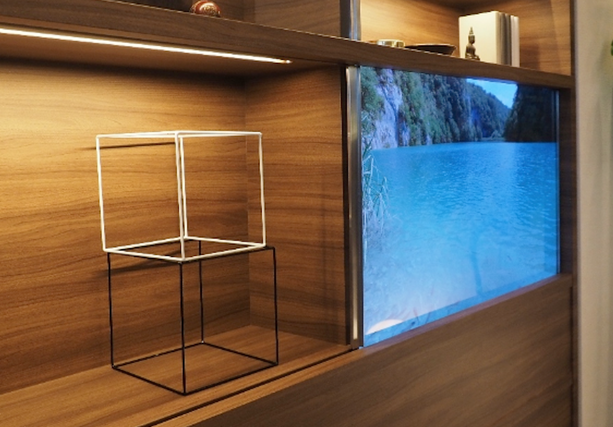 The following side by side shot really drives the point home.

The video below showcases what Panasonic has been working on and is absolutely jaw-dropping. The only downside is that Panasonic is planning to throw about three more years of development at the product before releasing it to the public.

As a final point of interest, it’s worth noting that Apple in the mid-2000s reportedly researched developing a transparent HDTV of its own. According to reports, Apple eventually gave up on the idea because “it used an enormous amount of power and the image quality was poor.”