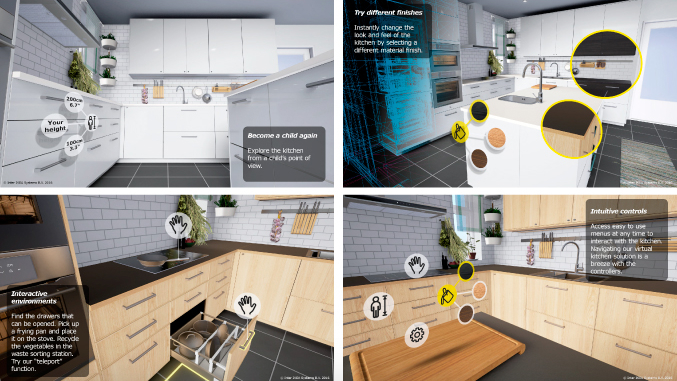 Virtual reality is here and products such as Oculus Rift, HTC Vive, and Samsung’s Gear VR are ready to offer various types of VR experiences. And VR content doesn’t have to be only about games, as Ikea will tell you. In fact, the Swedish furniture giant already has the right idea about using VR in unique, creative ways.

The company has partnered up with HTC and Steam to launch a pilot virtual reality kitchen experience for the Vive.

The Ikea VR Experience will let users design their own kitchens by accessing one of three real-world Ikea kitchen designs. Sure, you won’t be able to move freely around your kitchen and test out various Ikea furniture ideas that would overlap over your real kitchen, but you’ll still be able to customize the default kitchens inside VR. For the time being, you’ll be able to change colors and adjust your viewing height so that you experience the kitchen setup from the height of a child.

Interestingly, the Ikea VR kitchen concept was designed using the Unreal Engine 4 from Epic Games, in collaboration with developers at French company Allegorithmic. If you have a Vive, now is the time to try it out since the pilot will end in August.

While the app is pretty limited in what it can offer to the user, future versions of such Ikea software might one day help you redecorate your entire home in VR. That way, you’ll know exactly whether everything fits before you order, and you’d be able to test various colors and designs before settling on a final product.