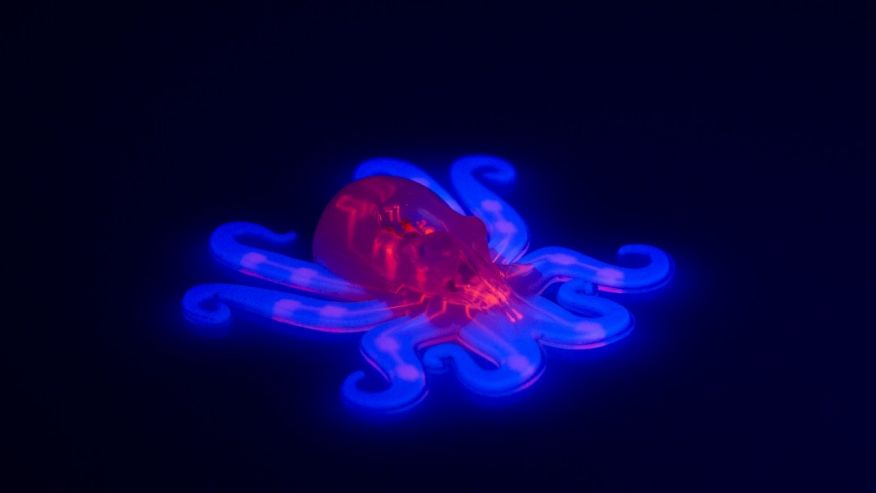 Meet the octobot, a unique new creation out of Harvard that the university says could be the first step in a new kind of bot.

This totally soft robot has eight movable legs, just like its flesh-and-blood marine cousin, which was the inspiration for the device.

Created partially through 3-D printing, the octobot is autonomous, according to Harvard’s John A. Paulson School of Engineering and Applied Sciences. Its power source is hydrogen peroxide, which together with a catalyst of platinum, creates gas that travels into the bot’s appendages to move them.

“One long-standing vision for the field of soft robotics has been to create robots that are entirely soft, but the struggle has always been in replacing rigid components like batteries and electronic controls with analogous soft systems and then putting it all together,” Robert Wood, a professor of engineering and one of the lead researchers behind the octobot, said in a statement. “This research demonstrates that we can easily manufacture the key components of a simple, entirely soft robot, which lays the foundation for more complex designs.”

Right now, based on a video released by Harvard, the octobot doesn’t seem to do much: it just moves its arms around. But the next step is to make it do more things, like crawl. In the future, this kind of device could be the first step towards making more soft robots that can control themselves, according to Harvard.

A study about the octobot technology was published Wednesday in the journal Nature.