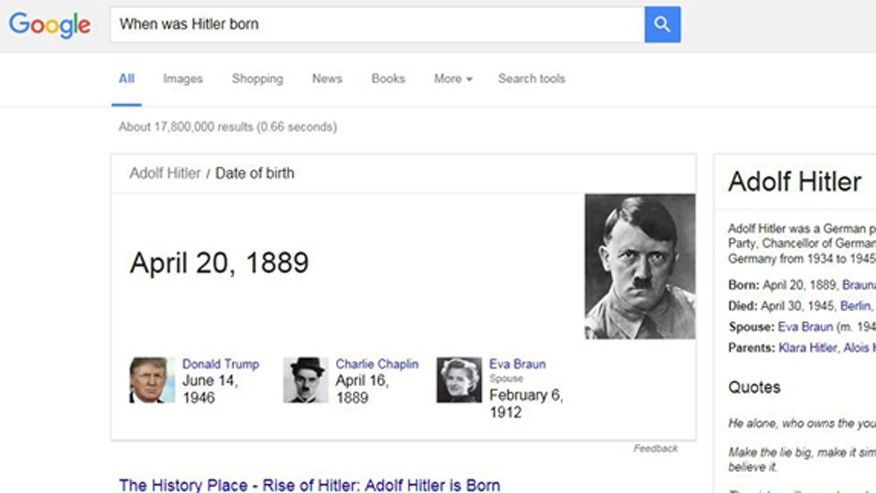 Google’s search function is once again in the spotlight for connecting Donald Trump and Adolf Hitler.

Typing “When was Hitler born” into the search engine Friday generated some of the expected information on the Nazi dictator, but also a Donald Trump image and link. Trump’s image appears alongside that of Hitler’s wife, Eva Braun, and Charlie Chaplin, who famously satirized the Nazi leader in his 1940 movie “The Great Dictator.”

The unusual search result caught the attention and sparked debate on the online forum Reddit, and has spread across the internet. Google told FoxNews.com that it is looking into why Trump’s image would appear alongside Hitler’s.

This is not the first time the search engine has connected the two men. In December, The Pulse 2016 reported Google showed  Hitler’s “Mein Kampf” in response to an image search for Trump’s book “Crippled America: How to Make America Great Again.”

The Trump-Hitler issue is the second controversy involving Google search this week. Google’s autocomplete function, which offers potential searches to users based on the topic they type into the engine, was questioned in a report released Thursday for allegedly favoring presumptive Democratic nominee Hillary Clinton.

Google has denied any autocomplete bias. “Google Autocomplete does not favor any candidate or cause,” the company said in a statement emailed to FoxNews.com. “Claims to the contrary simply misunderstand how Autocomplete works. Our Autocomplete algorithm will not show a predicted query that is offensive or disparaging when displayed in conjunction with a person’s name.” The Mountain View, Calif.-based firm adds that, more generally, its autocomplete predictions are produced based on a number of factors, including the popularity of search terms.