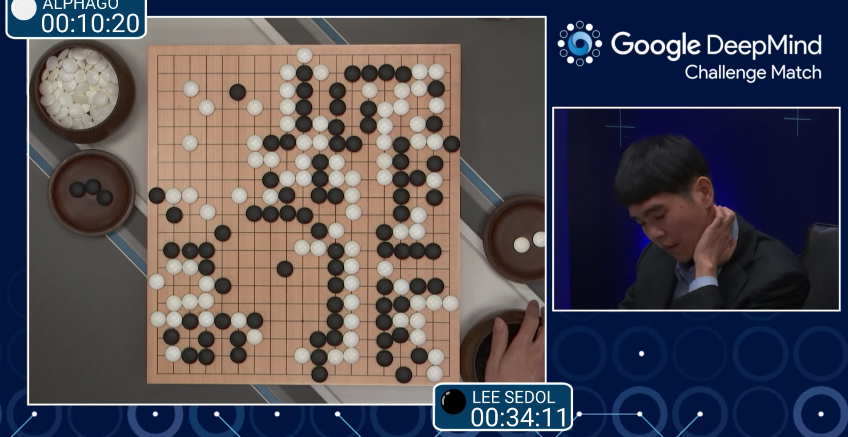 A historic battle is currently underway in South Korea, where Google’s best artificial intelligence is going head-to-head in a game of Go against a player who’s regarded as the best of the last decade. The two opponents will face each other in a battle consisting of five games, but the computer has already won the first round.

The feat is remarkable because Go is a game that computers have yet to win consistently when playing against humans. But Google created an advanced machine-learning computer that managed to outperform a human in a lengthy battle. That’s both exciting and scary at the same time.

Called AlphaGo, Google’s robot defeated a human Go player before by beating European Go Champion Fan Hui in a confrontation last October. However, Fan Hui is ranked 633rd in the world. AlphaGo’s current opponent is Lee Sedol, ranked number five and regarded the top player of the past decade, according to Wired.

While AlphaGo wouldn’t have been able to beat Sedol last year, the machine has learned a lot since then, upping its game to a level where it can comfortably go to war against Sedol.

How did AlphaGo get better? Google used a technology called reinforcement learning, with AlphaGo playing game after game against itself to improve its skills. In five months, AlphaGo taught itself to play better.

The computer doesn’t use a list of pre-set moves, and it’s able to adapt to the opponent’s moves better than other computers thanks to the way it was taught the game, and the fact that it can learn along the way.

The AlphaGo computer was developed in a Google AI lab in London called DeepMind for the last two years, with researchers significantly accelerating the learning period for the computer. Until recently, others believed that it would take at least 10 years until AI could beat humans at a game as complex as Go, but Google managed to do it a lot faster than that. Google used two machine learning techniques, including feeding large amounts of digital data to the computer, and practicing the game against itself.

The following short video from 2010 briefly explains how Go is played, and the ending is hilarious in light of today’s AlphaGo win, as it offers a fun fact: “Go is the only board game in which humans can still defeat computers with reliable consistency.” Well, come today, that’s not necessarily true anymore.

A replay of the first game between the two follows below.