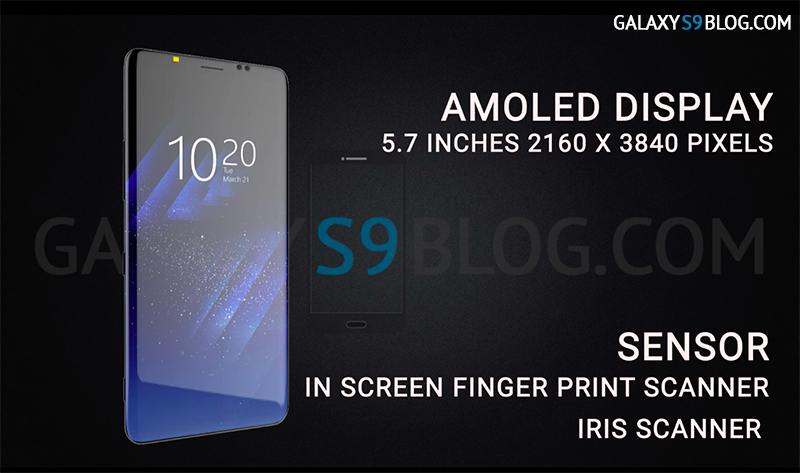 Before Apple accidentally flooded the internet with iPhone 8 data via a HomePod firmware leak, the Galaxy Note 8 was dominating headlines. Having been the subject of countless leaks itself, the Note 8 will finally see the light of day on August 23rd in NYC, where Samsung will host an Unpacked event to reveal the phone. But now, with just weeks left to go until the event, we suddenly find ourselves distracted by a stunning Galaxy S9 concept that has us looking ahead to 2018.

Earlier this week, GalaxyS9Blog.com shared a comprehensive concept design of next year’s Galaxy S9. Rumors regarding the Galaxy S9 suggest that it will retain the Infinity Display of the S8, S8+ and Note 8, but the concept takes things a step further by covering the entire front side of the S9 with the display. Even the camera, speaker and iris scanner have been embedded beneath the display:

Additionally, the Galaxy S9 concept presupposes that Samsung will build the fingerprint scanner into the display, eliminating the need for a rear-mounted scanner. The concept phone also lacks a charging port, as wireless charging will be the new standard mode of charging the battery on the S9.

As for specifications, the Galaxy S9 concept features a 5.7-inch 4K display, an octa-core processor with 6 and 8GB RAM options, 64GB and 128GB internal storage options, 4,200 mAh battery, dual 16-megapixel cameras on the back and dual 8-megapixel cameras on the front. The concept runs the latest version of Android, has a 3.5mm audio jack and costs between $900 – $1000.

Considering the Galaxy S8 launched in April 2017, we likely won’t see the Galaxy S9 until March 2018 at the earliest, but with all of the leaks we’ve seen this year, we might know more about the Galaxy S9 long before Samsung expects us to. In the meantime, we’ll see the Note 8 later this month.