Samsung’s annual Unpacked event is now less than two weeks away and, per usual, most everything the company is planning to introduce has already leaked out. To that end, we’ve long known that Samsung’s new flagship line will bypass the S11 moniker and will instead be called the Galaxy S20 series.

The photo below isn’t all that revealing, but it does give us an idea as to a) how the sizes of the varying S20 models differ and b) the extent to which the camera modules protrude from the backs of each device.

Note that the camera bump on the S20 Ultra model is quite significant. This, however, shouldn’t come as much of a surprise given how ambitious the S20 Ultra’s camera scheme is. As we covered previously, the S20 Ultra will likely feature a 108-megapixel wide-angle lens, a 48MP telephoto camera, a 12MP ultra-wide lens, along with ToF sensors. What’s more, rumor has it that the S20 Ultra will boast support for 10X optical zoom and digital zoom up to 100X.

As for other S20 points of interest, rumor has it that Samsung’s next-gen lineup will be released on March 6.

Galaxy S20 pricing meanwhile will likely be as follows:

And finally, a full rundown of S20 specs can be seen below: 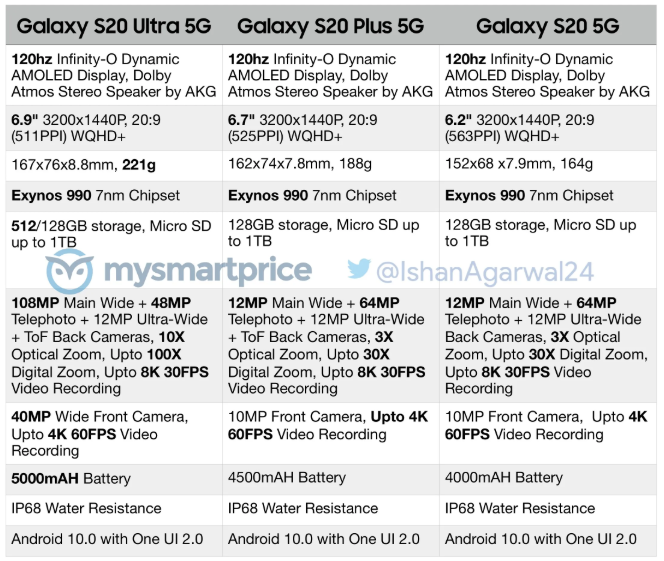