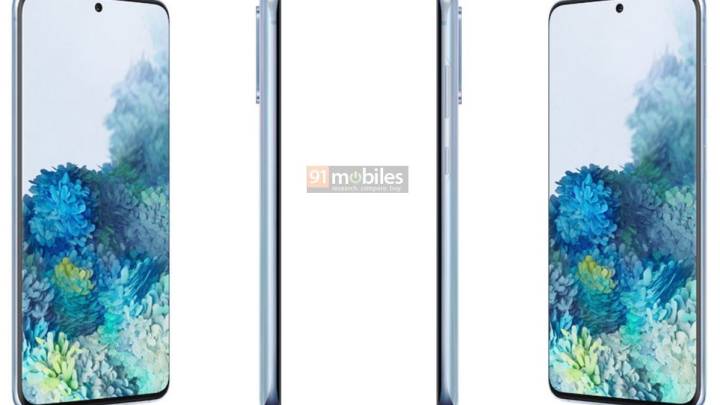 At this point, as is often the case with Samsung’s flagships phones weeks before their reveal, we know basically all there is to know about the Galaxy S20 series. The names, prices, specifications, and designs of the phones have all been spoiled in excruciating detail by more leaks than we can count, but on Thursday, the biggest leak of all dropped. Thanks to 91mobiles, we now know exactly what the S20, S20+, and S20 Ultra will look like.

As stated above, the designs of the phones have already appeared in countless leaks, but 91mobiles managed to get its hands on official renders of all three phones from prolific leaker Ishan Agarwal this week. Providing the renders are legitimate, Samsung has virtually nothing left to unveil at its Unpacked event on February 11th.

First up is the Galaxy S20, which, as expected, features a rectangular camera module on the rear panel with three lenses and an LED flash. The volume buttons and the power button are both on the right side of the phone, while the left side is free of physical buttons. Goodbye, Bixby button. Moving to the front, the Infinity-O display is still intact, but the selfie camera has been moved to the center of the screen to match the Galaxy Note 10:

As for the Galaxy S20+, the design is virtually identical, save for a larger display and an extra sensor on the camera module, bringing the total for the Plus model to four. Everything else looks pretty much the same:

Finally, the biggest changes appear on the Galaxy S20 Ultra, where a truly unique camera module on the rear panel has taken the place of the relatively tame module on the S20 and S20+. Much like the S20+, the S20 Ultra will have four camera sensors, but the one at the bottom is a periscope sensor capable of 10x optical zoom and 100x digital zoom. Samsung is apparently calling this “Space Zoom,” as you can see in the render:

Beyond the renders, the report also included a fairly random assortment of prices for various S20 models:

All three models are expected to be available in Cosmic Black, Cosmic Blue, and Cloud Blue colors. We’ll see just how much of this leak (and all of the others leaks) is true during the reveal on February 11th.