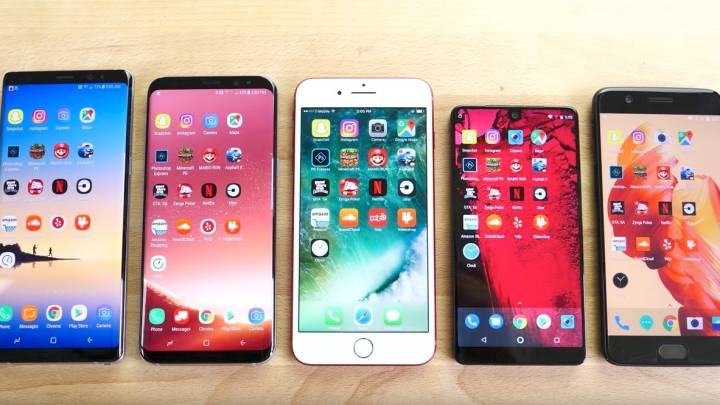 There’s a brand new flagship Android handset in town, which means it’s time to compare its performance against every other top handset from the competition. The Galaxy Note 8 already lost to the iPhone 7 Plus in an earlier video comparison, but how does it fare against some of the best Android alternatives out there, including the Galaxy S8, the Essential Phone, and the OnePlus 5?

The EverythingApplePro YouTube channel that performed the recent Galaxy Note 8 vs. iPhone 7 Plus speed test is back with another video comparison. The results will not surprise anyone. The iPhone 7 Plus may have fewer cores and less RAM than all the other smartphones, but it’s still the fastest phone available right now.

The iPhone 7 Plus will not open every app faster than its rivals, but it’ll be faster at switching between apps and opening apps from memory than any other phone. And that’s basically what we do on our smartphones all day. We move back and forth between various apps.

The Galaxy Note 8 comes in second, outperforming all other Android devices, including the Galaxy S8 which is basically just a smaller Galaxy Note 8 version on paper.

The Essential Phone provides an unexpected surprise when it comes to performance. It’s a lot slower than expected, and the more apps you open, the slower it becomes. That’s despite the fact that it sports the same processor as all the other phones used in the test.

What the video also suggests is that the iPhone 8 and iPhone 7s will obliterate the competition in similar tests. In the meantime, the video of this latest speed test is embedded below.