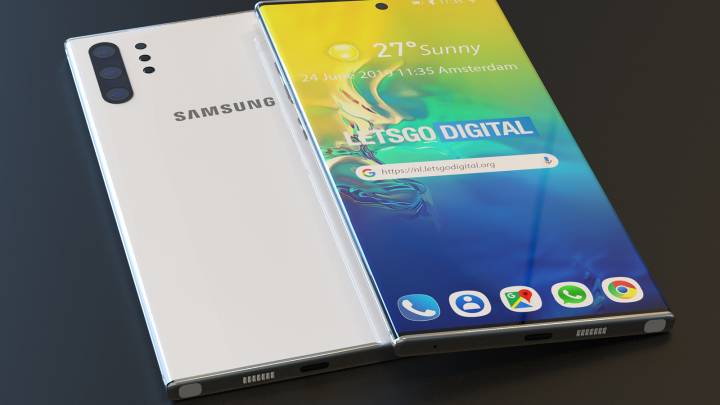 Samsung will unveil the Galaxy Note 10 on August 7th in New York, and the phone is expected to go up for preorder soon after the Unpacked press conference ends. But the Note 10 series is not really a secret, as the phone’s features leaked several times in the past few months. The newest Note 10 leak tells the same story, further confirming the Note 10 series phones’ unique design as well as their specs. More interestingly, a new report tells us exactly what we get instead of the headphone jack that Samsung has finally decided to ditch.

The folks over at TechManiacs claim they have obtained plenty of information from a trusted source about the Note 10 series. The phone will come in two sizes, just as you expect, including 6.3-inch (Note 10) and 6.8-inch (Note 10+). The phones will weigh 168g and 198g, respectively.

The smaller model will feature a Full HD display, while the Note 10+ will deliver QHD+ Infinity O screen. Both devices will have the same hole-punch display design and will feature triple and quad camera systems on the back. The Note 10 will pack a 3,500 mAh battery with 25W charging, while the Note 10+ gets a bigger 4,300 mAh battery with 45W charging. But you’ll need to buy a new charger to take advantage of fast-charging on the Plus model.

This is where the headphone jack detail comes into play. Samsung was able to add 100 mAh of extra battery life to each phone by killing the headphone jack. Previous reports said that Samsung would also bundle the phone with a pair of USB-C wired headphones to make up for the absence of the audio port. One other thing that’s gone on the Note 10 is the Bixby button, but the Bixby feature is still built into the phone. It’ll be accessed with the power button instead, just like Siri on Apple’s iPhones.

The S Pen stylus is getting its own upgrade and will support new features including a gesture to navigate photos and new sounds that play while you use it. For example, the stylus will reportedly sound like a highlight marker when using it to highlight things.

Finally, the Greek-language blog teases several new camera-related features, including live focus for videos, night mode for the selfie camera, and a feature described as “zoom audio” for clips.