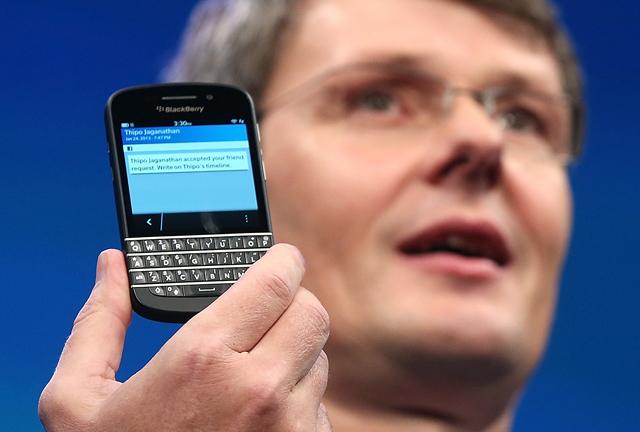 To say former BlackBerry CEO Thorsten Heins left BlackBerry in a precarious state would be an understatement. He left BlackBerry in 2013 after overseeing the failed commercial launch of BlackBerry 10 and then the failed attempt to take the company private. Given the completely dismal state of BlackBerry in those dark days, it’s impressive that current CEO John Chen has been able to stabilize it as much as he has. Despite his not-so-spectacular track record, however, another company decided to name Heins as its CEO after his departure from BlackBerry, and he’s been the center of some significant controversy.

FLASHBACK: Heins in 2012 said ‘there’s nothing wrong’ with BlackBerry

CNET reports that Heins, who now serves as the CEO of a wireless charging technology company called Powermat Technologies, is being sued by three members of his own board for allegedly “operating without an approved budget and steering the business into insolvency.” One of the board members behind the suit is Ran Poliakine, who is Powermat’s founder and former chairman and CEO.

The suit alleges that Heins and three other executives have created a “serious trust crisis” by running the company without an approved budget, although Heins and Powermat are vehemently denying all these accusations.

“Powermat is optimistic that the court will see through the substantial misstatements and malicious half-truths leveled by the former CEO and allow the company to continue the substantial progress it has made over the past year,” the company said in a statement sent to Business Insider.

Here is Powermat’s full public rebuttal to the lawsuit’s allegations:

On November 25th, Powermat filed its response to misleading allegations leveled by the company’s former CEO, against Powermat management and board members. The response refutes every claim and reveals how the current executive team supported by the majority of the board has worked over the past year to establish a compelling and competitive business model while correcting a range of legacy issues created by previous management. Specifically, the company’s response:

• Shows through the petitioners’ own words and emails that the company’s annual budget was properly and unanimously approved by the board – including the petitioners themselves
• Demonstrates that management has successfully reduced the company’s burn rate from previously unsustainable levels under the prior CEO
• Reveals how the petitioners’ own actions and behavior have undermined the company’s efforts to obtain additional outside investment
• Defends the current executive team’s turnaround efforts through new ventures and technology – all the while trying to address significant issues created by prior management
• Consequently requests that the court immediately lift a temporary injunction so the company may continue the substantial progress it has made over the past year.

By revealing these and other details about the company’s turnaround, Powermat is optimistic that the court will see through the substantial misstatements and malicious half-truths leveled by the former CEO and allow the company to continue the substantial progress it has made over the past year. In the detailed statement of response, submitted by Powermat to the court through its attorneys, Aharon Michaeli and Yehuda Rosenthal of Goldfarb Seligman, the company presents well-founded arguments against each of the claims made by the plaintiffs, and reveals the business strategy that has succeeded over the past year.