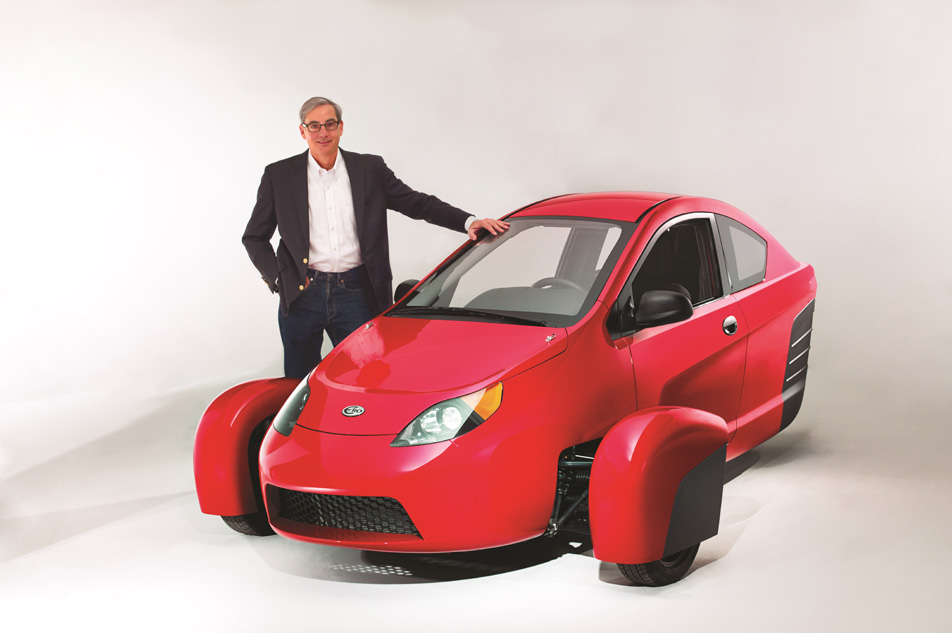 All of the buzz around the cars of the future — from the millions of dollars in investment sloshing around the industry to the glitzy unveilings at places like Tesla — can easily make it seem like everything is the Next Big Thing. Where everywhere you turn, you breathe in that sweet new car smell, all of it a great smashing of the old order.

The story of entrepreneur and car enthusiast Paul Elio is reflective of what it takes for all that to happen.

His company Elio Motors — which is built around a three-wheeled vehicle sort of like a motorcycle that gets 84 miles per gallon and has a base price of just $6,800 — is starting production on its flagship vehicle next year. Like other car startups, it’s raised millions in investment funding. It’s also collected almost 55,000 reservations for its vehicle, which Elio will crank out at a former General Motors facility in Louisiana.

Elio has also taken several recent steps forward on its path toward realizing a dream the company’s founder has nurtured for almost a decade — to build a successful car company, something that, minus Tesla, Elio is quick to point out no one has done in the U.S. since Walter Chrysler in 1925. Those new steps include forming a partnership with a Canadian supplier to make engines for Elio’s vehicles. Elio Motors also has been expanding its leadership ranks, with just-added hires that include a manager of logistics, director of safety engineering and an engineering program manager.

For the company’s founder, though, the ambition hasn’t come cheap or easy. Once they start rolling out of the factory, each finished model will also serve as a reminder of what Elio had to pay along the way — a failed marriage and seeing his personal wealth evaporate while in pursuit of his singular dream for an affordable, fuel-efficient car for the mass market.

He founded Elio Motors in 2009. By October 2010, he recalls, all of his assets were gone. He was getting utility cutoff notices and hadn’t made a house payment in a while.

One of the low points was taking his watch to a pawn shop and then realizing he could get more for it if he sold it instead on eBay.

“It’s been a long road, no doubt about it,” says Elio, whose company in recent days also announced a partnership with The Onion for a digital media campaign. “I think what keeps you going on the hard days – the ‘why’ is we can create thousands of new American jobs over the next year and a half. And we can reduce total U.S. gas consumption. That’s a big deal.

“A Harvard economist also came out with a study six months ago that said the number one correlation to whether or not you have poverty is mobility… so when you know you can transform our society, this project is a big deal. It really moves the needle on a lot of important things. And once you know that, how could you possibly give up?”

Elio kicked off the year with some good news. In addition to the growing number of reservations, the company closed an equity crowdfunding campaign that brought in over $17 million. That money is being used to build its E-series prototype.

The money is also going toward finalizing the engineering around things like durability, aerodynamics and safety. Elio himself is feeling a lot better these days, well past the darker days when he was broke and close to pawning his watch.

His company today has three centers of gravity, so to speak. Its founder lives in Phoenix, while the VPs of manufacturing, government affairs, purchasing and engineering are in the Motor City in Detroit. The company also has the manufacturing site in Shreveport.

“We were kind of stalled out before the fundraising. That’s what we needed to do to build the E-series prototype. We’re actively doing that, and the first series vehicle should be complete soon. We’ve taken the design as far as you can virtually. Now we’re building the prototypes and validating those simulations. Based on the strength of those, we’ll go to production.”

Meanwhile, Elio is also continuing to build out its leadership team. It has its top brass firmly in place, Elio explained, and is now working to build an organization under each of those executive “to pull off what we want to pull off.”

“We’ve definitely proved there’s a demand for this,” he said of the company’s vehicle. “We just got a study back last week or the week before – we did a study on have you ever heard of Elio, and only 6.5 percent of Americans had ever heard of us. So as impressive as 55,000 reservations is, we got that from 6.5 percent of the population. When you scale that up … just on awareness alone, I think there’s a lot to gain.