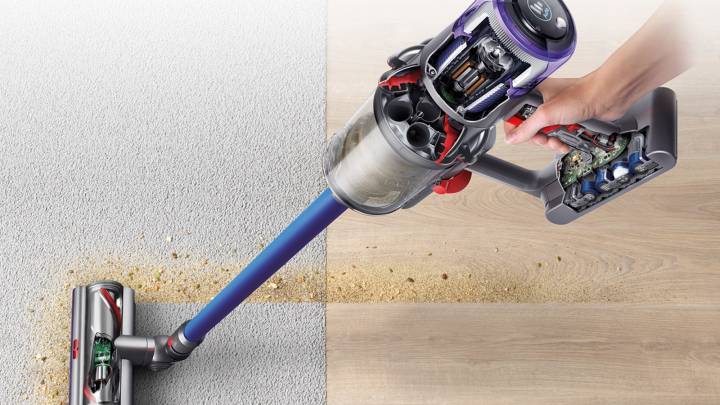 Dyson has led the charge in the evolution of the cordless vacuum for years, but this week, the company is unveiling the most futuristic stick vac to date. Meet the V11, which Dyson says is the result of more than ten years of cord-free vacuum and digital motor development. At a glance, it looks incredibly similar to the Cyclone V10, which arrived last April, but there are a variety of notable upgrades on board, some more obvious than others.

The advancement that Dyson’s representatives were most eager to show off during our meeting was the intelligent Dynamic Load Sensor (DLS) system. This system is capable of detecting the resistance of the brush bar on the new High Torque cleaner head, and then communicating with the motor and the battery in order to increase or decrease the suction power depending on whether the vacuum is being used on a carpet or a hard surface.

The sheer power of this relatively lightweight device is hard to overstate. Though it glides along on hardwood floor as you would expect a vacuum cleaner to, it really digs in when you hit a carpet, which allows the nylon bristles to break apart the dirt and grime that might have settled in. The resistance was noticeable, but based on how quickly the V11 canister filled up, it’s clear that the carpet in my living room needed some tough love.

Visually, though, the star of the show is the new LCD screen, which not only displays the remaining battery life down to the seconds (and updates in real-time as you move from one surface to another), but also shows you which mode you’re currently in. But that’s not all — it will also automatically run a short video if your vacuum gets clogged, telling you where to look for obstructions, and warns you when it’s time to clean your filter.

Another major change from the V10 to the V11: You don’t have to manually change to max mode when you move from a hard surface to a soft one. Of the three modes available, the one you’ll be in most often is Auto mode, which will adjust to the task at hand without any manual input. On the other hand, if you know you’re going to be vacuuming exclusively on a carpeted floor, you can switch over to the high-powered Boost mode with the push of a button. And if you instead value battery life over power, the Eco mode will provide plenty of run time.

Dyson goes in to all sorts of technical detail in the press release for the V11, but here’s what you really need to know: It offers 20% more suction power than the V10, it can last for up to sixty minutes of cleaning time (depending on the surface and the mode selected), the canister is up to 40% larger (depending on the model), and, according to Dyson, the V11 “learns” as you use it, and the algorithm will subsequently provide a more accurate battery life estimation the more you use it. The battery itself is not affected, but you’ll have a better idea of how long it will last.

Perhaps most importantly, the V11 also retains the “point and shoot” emptying mechanism of the V10, which allows you to simply pull down on a red lever while the canister is positioned over a trash can to eject the contents without actually having to touch open anything or reach in and root around for gross remnants.

Dyson will sell two variants of the cordless vacuum on its website and at Dyson Demo stores. The Dyson V11 Torque Drive will retail for $699, while the Dyson V11 Animal will be available for $599.