Cavalier Maverick review: Everything the Amazon Echo should be

Amazon invented the smart speaker market out of thin air when it first launched the Amazon Echo. Since Alexa first found her way into kitchens across the country, a host of other big players like Apple, Google, and Sonos have entered the market with their own versions, and smart speakers have become big business.

But that doesn’t mean that you can only buy your speakers from mammoth companies. Cavalier Audio, a New Jersey-based company, has debuted the Maverick. It’s an Alexa-powered speaker about the same size as an Amazon Echo, but the difference between the two devices couldn’t be more pronounced. The Maverick is made from distressed leather, machined metal and knitted fabric to give a premium feel, it has well-thought-out controls like a giant volume knob on the top, and most importantly, it has a battery so that it’s not tethered to your kitchen counter.

I’ve been testing a Maverick for several weeks prior to its launch, and overall, it lives up to its promise, which is a good thing for a portable speaker that costs $299. I’m a fan primarily because of the versatility — it works almost exactly like an Amazon Echo at home (with arguably better audio and design), but is also designed for life on the road.

Let’s talk about how it works as a stationary speaker first, however. When it’s sitting in your kitchen or bedroom, the Maverick lives on a circular leather charging dock that keeps it juiced up. In fact, if no one moves it, you probably wouldn’t notice that it’s a portable speaker. It has always-on voice control via Amazon Alexa, with voice recognition that worked from across a mid-sized room. If you’ve used Alexa before, you’ll be aware of the wealth of things you can control with your voice, so I’m not going to dive into that here — suffice to say that it’s tied with the Google Assistant for the best thing that you can have inside a smart speaker.

There’s a 20W stereo speaker system that sounds about as good as you’d expect from a speaker the size of a wine bottle. Unlike Apple’s HomePod, say, it doesn’t use physics-defying audio tricks to get unusually big or punchy sound, but it’s perfectly adequate to fill a medium-sized room. This is an ambience speaker, not one designed for hosting a party, but it does keep good definition when you turn the sound all the way up, and the sound is accurate all the way across the spectrum. 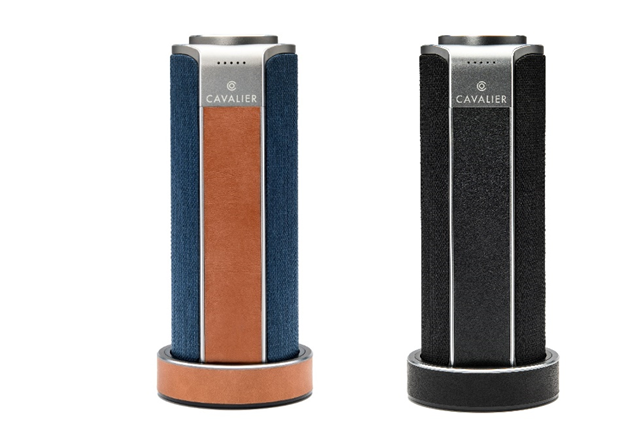 When you’re at home, you control the speaker either using the buttons on the side and the volume dial, or through Cavalier’s app. I had a few testing bugs using the iOS app, but after the speaker’s launch last week, the problems seem to have been worked out. It supports playback using Spotify Connect over Wi-Fi, and my only particular problem with the speaker’s use day-to-day is that it takes a little longer to start playing music when you cast from the Spotify app than my other Wi-Fi speakers. That delay certainly isn’t a deal-breaker, but it is noticeable compared to a Sonos or Raumfeld system.

This speaker’s particularly unique selling point, however, is what happens when you pick it up off the charging dock and start wandering around. It supports playback over Bluetooth as well as Wi-Fi, so it’s a perfect candidate for taking down to the dock or a tailgate. It’s not a rugged outdoor speaker, and the sophisticated leather looks certainly don’t fit in at the beach, but the functionality of being able to take it outside of a Wi-Fi zone and still play music wirelessly is fantastic. The battery lasts for around 7-8 hours when streaming music over Bluetooth, which seemed adequate for everything I used it for. One of the nicest touches is that the speaker has a USB-C port on the back, so that you don’t have to take the charging dock with you, just a USB-C cable and a charger. If the speaker is propped up a little precariously on a cooler or something, it’s nice to not worry about it falling out of the charging dock, and it’s also just one less thing to carry.

Overall, there’s a lot to like and not much to nitpick on the Maverick. The design is good (and different from most other smart speakers), the sound quality is great, and the features and controls are well thought-out. The software is probably the weakest point, as the app proved a bit buggy and occasional errors with casting music or pairing remind you that this is a still a small company with a fledgling product, compared to speaker companies like JBL or Sonos that have been doing this for a decade.