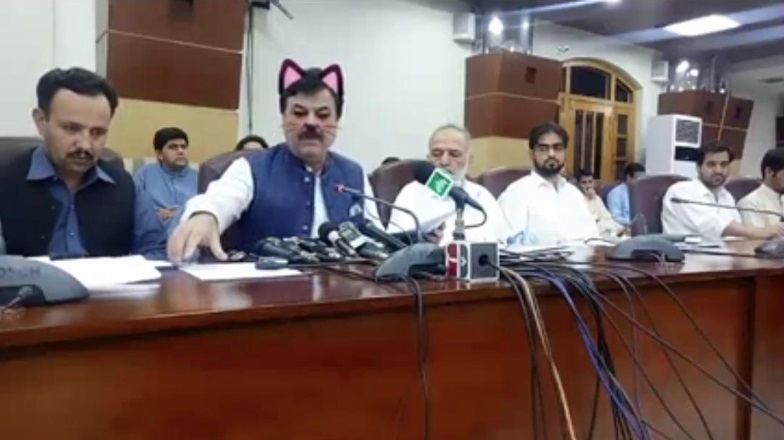 In something of a ridiculous and yet lighthearted story, a Pakistani politician’s press briefing with journalists recently became comedic fodder after a cat filter was applied to the faces of individuals being recorded via Facebook live. The incident, which was attributed to human error, showcased regional minister Shaukat Yousafzai — and others — with cat ears and whiskers while talking about otherwise serious topics.

The cat filter was live for a few minutes before someone noticed it and promptly removed it. But for a few glorious minutes last Friday, viewers were witness to an event seemingly lifted out of a kids-version of Black Mirror.

It was several minutes before organisers realised that the minister had acquired pointy ears. When one of his moustached party colleagues began to speak, looking earnest and holding a pen, he too was transformed into a cat.

Hardly a surprise, folks on Twitter had a field day with the minor debacle. And truth be told, using photo filters during all political events might actually persuade more people to become politically active.

All told, it’s been interesting to see how quickly filters have evolved. Back during the early days of Instagram, for example, photo filters were relatively straight forward and simply involved adding some nice tonal effects to photos. These days, with Snapchat leading the way, photo and video filters have transformed dramatically. Today, filters have become incredibly quirky and now exist across a multitude of social networking sites and apps.