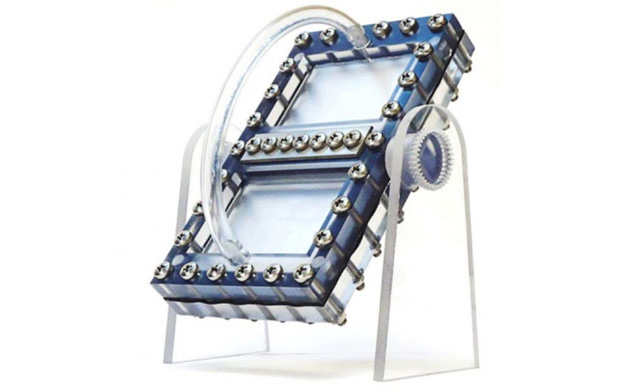 It’s the same old story: batteries are holding us back. Technology is advancing so quickly across so many industries, but the next-generation batteries needed to power all of these advancements more efficiently are nowhere to be found. Researchers are hard at work on improving existing battery tech though, and they’re also developing exciting new kinds of batteries that could someday proliferate. Now, scientists at the Massachusetts Institute of Technology think they may be on an exciting path toward building a new type of liquid battery that uses gravity to generate energy.

The brilliant concept for the researchers’ new battery design was described in a paper published recently in the journal Energy and Environmental Science. Titled “A low-dissipation, pumpless, gravity-induced flow battery,” the paper covers a new liquid flow battery that uses gravity to generate energy.

Liquid flow batteries are not a new concept. In fact, the earliest liquid flow battery designs date back to the 1970s. The basic idea is that the positive and negative electrodes exist in liquid form and are separated by a membrane. Particles traveling from one terminal to the other in a liquid slurry generate electricity. But all earlier liquid flow battery designs have something in common: They rely on complex and expensive systems of tanks, pumps and valves to move the chemical compounds contained within the system.

The new design — developed by MIT researchers Xinwei Chen, Brandon J. Hopkins, Ahmed Helal, Frank Y. Fan, Kyle C. Smith, Zheng Li, Alexander H. Slocum, Gareth H. McKinley, W. Craig Cartera and Yet-Ming Chiang — completely eliminates the need for complicated pump systems. Instead, it uses a simple gravity feed to move the slurry down a narrow channel and generate energy. What’s more, the rate of energy produced by this new type of liquid flow battery can be increased or decreased simply by adjusting the angle of the battery, which will either speed or slow the flow rate.

And now, the unavoidable bad news — the prototype built by the MIT team is just a proof-of-concept and the researchers are nowhere near commercializing it at this point. Kyocera Professor of Ceramics Yet-Ming Chiang, the lead author on the paper, likens the team’s current creation to a concept car. Chiang is confident that the design will ultimately lead to a real product though, and it could have applications across a number of industries.

“The new design should make possible simpler and more compact battery systems, which could be inexpensive and modular, allowing for gradual expansion of grid-connected storage systems to meet growing demand,” Nanowerk News noted. “Such storage systems will be critical for scaling up the use of intermittent power sources such as wind and solar.”