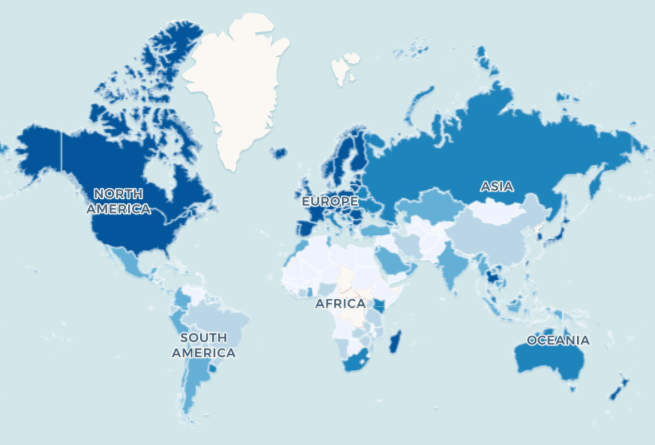 With Google Fiber’s public mission to destroy the cable companies on hold and 5G networks properly launching only in 2019, you’d be forgiven for thinking that internet providers have been treading water for the last year. But new data from M-Lab, a research partnership between Google, Princeton, and groups like the Open Technology Institute paint a very different picture about what’s been happening on a global scale.

In the period from 30 May 2017 to 29 May 2018, global average internet speed as measured by 163 million individual speed tests rose by 23 percent. The average broadband connection now clocks in at 9.1Mbps, up from 7.4Mbps in the year before.

News was particularly good for the United States, which moved up from the 21st-fastest country in 2017 to the 20th-fastest country in 2018. That might not sound like much of an improvement, but it was achieved by increasing speeds from an average 20Mbps to nearly 26Mbps, a bigger increase than the average.

The US’s improvement is a consistent story at the top of the table. Singapore, which held the first place in 2017 and 2018, increased its mean download speed from 55Mbps to 60Mbps. Denmark, in third place, added a full 10Mbps to its average download speed to go from 33 to 43Mbps.

Unfortunately, the improvements at the top of the table also hide the stagnation at the bottom. China dropped to 141st place (from 134), with a download speed of just 2.4Mbps, and the slowest countries like Syria and Somalia are stuck under 1Mbps.

“With average broadband speeds rising by 23% in just one year it would be easy to assume an overall positive global picture, said Dan Howdle, consumer telecoms analyst at Cable. “However, a closer look reveals the acceleration is concentrated towards the top end: the faster countries are improving more quickly, with those towards the bottom end of the table verging on stagnation. Europe, the United States and thriving economic centres in the Asia-Pacific region (Singapore, Japan, Taiwan and Hong Kong) are leading the world when it comes to the provision of fast, reliable broadband, which suggests a relationship between available bandwidth and economic health. Those countries leading the world should be congratulated, but we should also be conscious of those that are being left further and further behind.”