For a company that tends to value keeping upcoming products and services under wraps, Apple’s interest in self-driving car technology is far from a well-kept secret. Quite the contrary, Apple CEO Tim Cook about a year and a half ago took the somewhat rare step of confirming Apple’s interest in developing autonomous systems for cars.

“It’s a core technology that we view as very important,” Cook said back in June of 2017. “It’s probably one of the most difficult A.I. projects actually to work on.”

Funny enough, Cook’s use of the phrase “difficult” might have been something of an understatement. According to a report from The Last Driver License Holder, Apple’s self-driving car effort has resulted in far more disengagement incidents than any other company testing self-driving vehicles in the state of California. For clarity, a disengagement occurs when a driver of an autonomous vehicle re-assumes control of the wheel.

The data in question was compiled for a period stretching from December 2017 through November of 2018. The chart below speaks volumes. 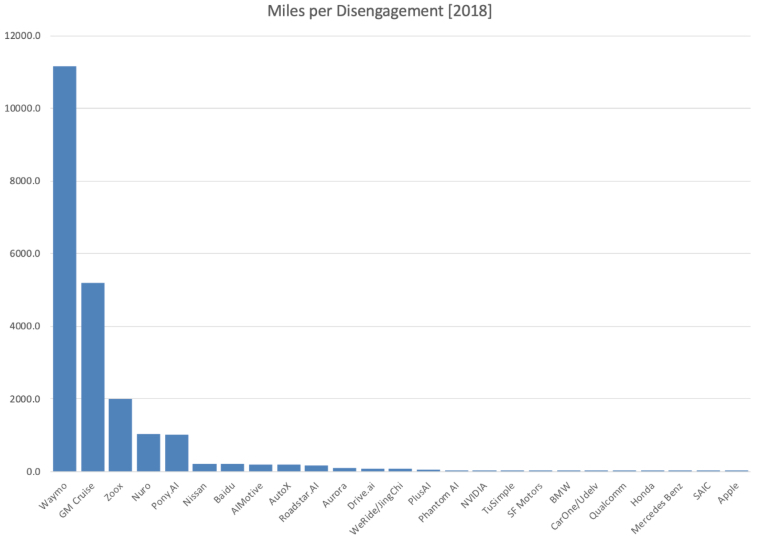 At this point, it’s hard to imagine Apple making an official jump into the automotive space anytime soon. And while some analysts maintain than an Apple branded car may be on the way as soon as 2025, the data above suggests Apple needs a lot more time to get even a basic handle on self-driving car technology.

It is worth mentioning, though, that all of the data above stems from self-reporting, which is to say some of the data may be skewed if not wholly incomplete. Further, the data itself doesn’t take into account the driving environment the disengagements occurred in. Imagine, for example, that Apple is busy pushing its self-driving cars to the limit on public highways while other companies test out their own software on quieter roads where the margin for error is much more expansive.

One interesting data point is that Apple now employs 62 cars for autonomous vehicle testing, with the majority of them, if not all, being modified Lexus SUVs.

We have an incredibly talented team working on autonomous systems and associated technologies at Apple. As the team focuses their work on several key areas for 2019, some groups are being moved to projects in other parts of the company, where they will support machine learning and other initiatives, across all of Apple. We continue to believe there is a huge opportunity with autonomous systems, that Apple has unique capabilities to contribute, and that this is the most ambitious machine learning project ever.