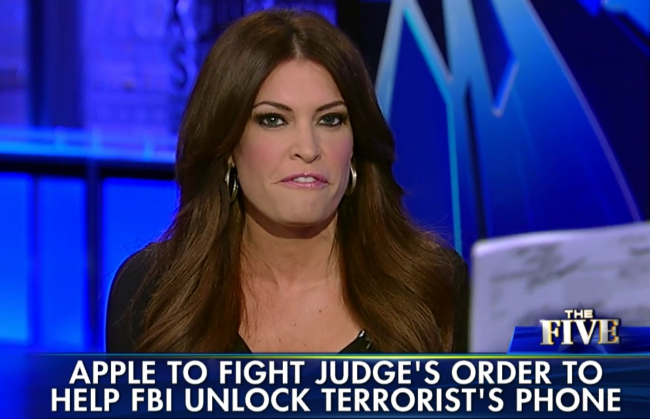 You may think you love America, but Fox News host Kimberly Guilfoyle loves it enough to make the ultimate sacrifice: Switching back to BlackBerry. During a discussion of Apple’s decision to defy a court order asking it to help the FBI disable the passcode security protocols on an iPhone used by one of the San Bernardino shooters, Guilfoyle ripped into Apple and said that the company shouldn’t put up this much of a fuss about helping the FBI break into one specific iPhone.

DON’T MISS: Trump’s feud with the pope is the greatest moment in presidential campaign history

“Grow up and keep America safe, Apple,” thundered Guilfoyle on yesterday’s edition of The Five. “I’m going to go back to BlackBerry, you guys suck and you might as well be unindicted co-conspirators.”

She also said on the program that Apple’s decision is a “victory for ISIS” and asked Apple “what team are you playing on?”

Interestingly, I found this particular video because it was retweeted by none other than BlackBerry:

This would seem to imply that BlackBerry actually thinks Apple should have caved to the FBI’s demands and helped them bypass their own security procedures. This would be a strange stance for BlackBerry to take since several major tech companies have rallied around Apple and have argued that it’s dangerous to force companies to enable hacking on their own devices.

You can check out Guilfoyle’s rant against Apple in the video that’s embedded in the tweet below.

.@kimguilfoyle: "Grow up and keep America safe, Apple, I'm going to go back to @BlackBerry." #TheFivehttps://t.co/OYetlc8kEN