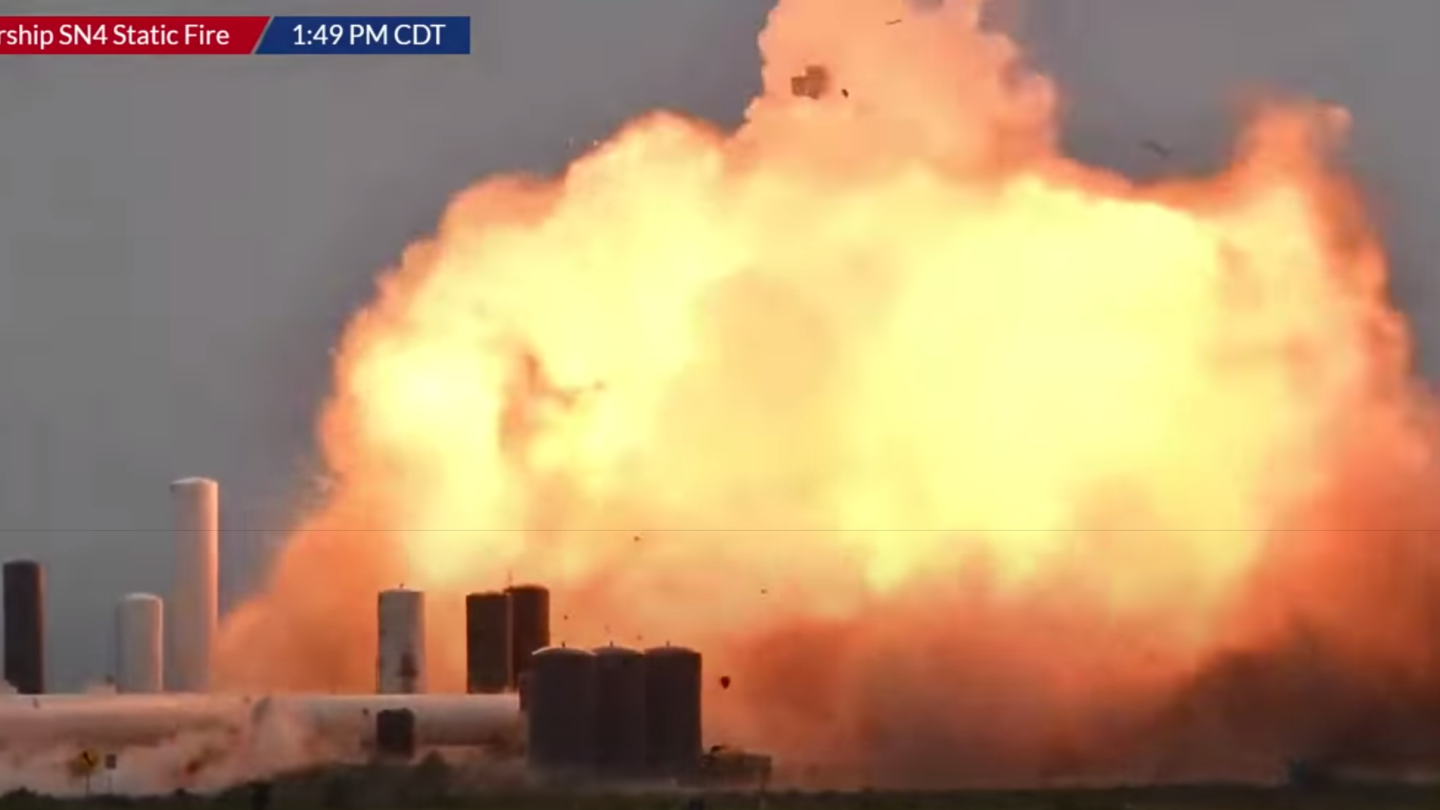 SpaceX had an incredibly eventful weekend. Its Crew Dragon capsule traveled to the International Space Station and for the first time ever it had astronauts along for the ride. It was a huge accomplishment for SpaceX and a very big deal for NASA, which desperately wants the ability to send humans into space whenever it desires.

Unfortunately, not everything swung in SpaceX’s direction, and a test of a SpaceX Starship prototype ended in the worst possible way on Friday. A static fire test — a test of the vehicle’s propulsion system without it leaving the ground — resulted in a massive explosion and a complete loss of the prototype known as SN4.

Testing of SpaceX’s vehicles isn’t something that is typically open to the public, but that doesn’t stop SpaceX enthusiasts from hunkering down and recording some of the company’s efforts from afar. NASASpaceflight is one of those groups, and it recorded a live video feed of the static fire test, capturing the incredible explosion in all its glory.

The video is pretty wild. It begins with the prototype vehicle being readied for its static fire test and offers commentary from the NASASpaceflight enthusiasts who know plenty about these kinds of events. Everything seems to be going smoothly until the test area becomes flooded with some kind of smoke or vapor.

The observers comment that they’ve never seen such a thing during a static fire test before, and begin to suggest possible explanations. They discuss whether it may be oxygen or methane, and just a few moments later, the entire vehicle explodes, leaving virtually nothing behind in its place.

It’s actually kind of fun to hear the commentary as the observers attempt to identify what has been left behind after the big boom. They offer their own theories on what might have gone wrong and pick through the wreckage from afar based on what they can see. What they definitely can’t see is the SpaceX Starship prototype that seemed to vanish into thin air.

At this point, it remains unclear exactly what caused the Starship prototype to explode in such a way. An investigation will be conducted, as is always the case when something like this happens, and SpaceX will attempt to get to the bottom of it. Whatever the case, this is exactly why these kinds of tests are conducted, and spectacular failures right now mean less risk of similar failures down the road.