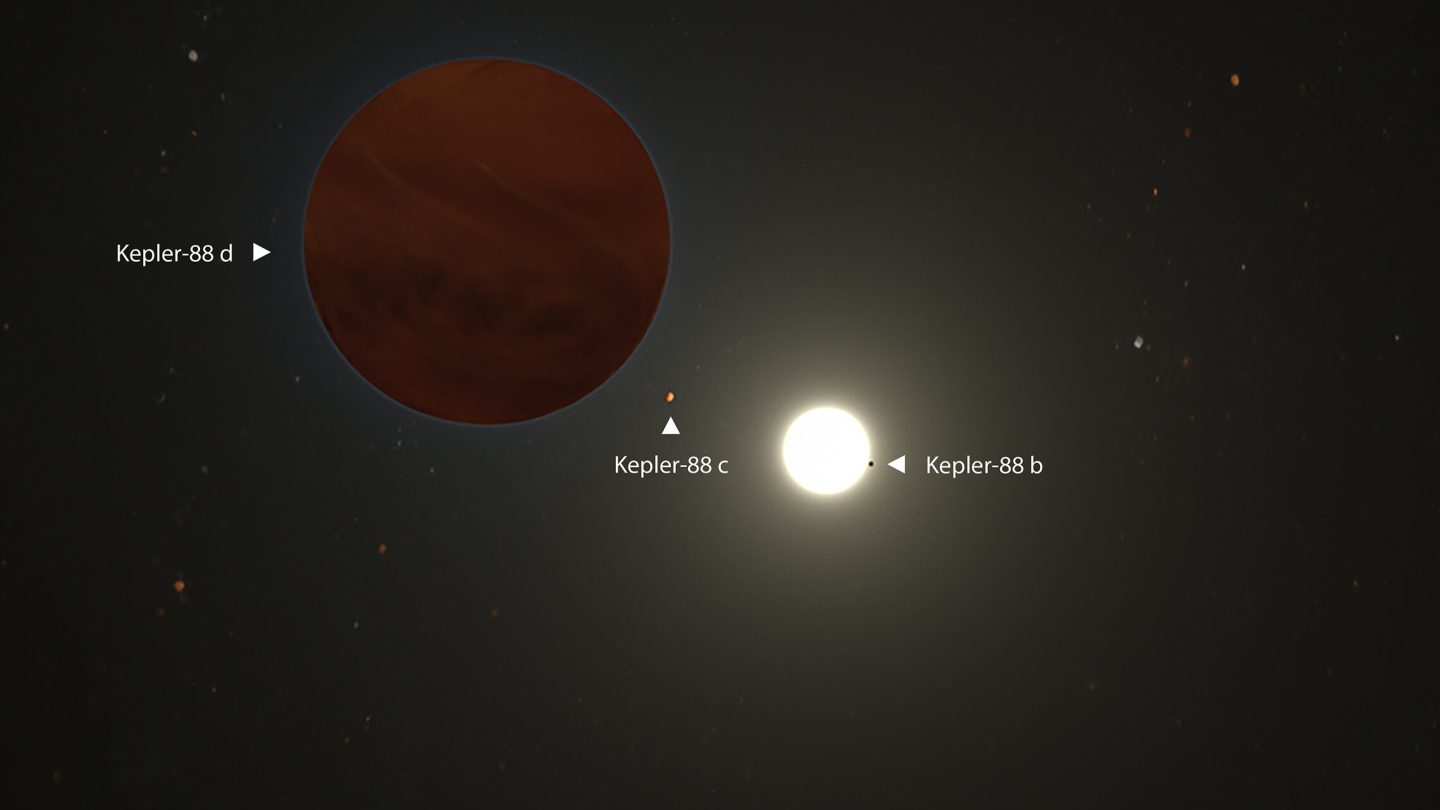 The mighty Jupiter rules our solar system with an iron fist. Well, okay, it doesn’t really do anything like that, but it is considered the “king” of the planets in our system simply because it is indeed the largest. It was once hard to imagine a planet larger than Jupiter — which has storms that you could fit the entire Earth into — but exoplanet research has revealed that even Jupiter is a small fry compared to what’s out there.

Now, a new study published in The Astronomical Journal reveals the existence of a planet orbiting the distant star Kepler-88 that would put Jupiter to shame. With a mass equivalent to around 300 Earths and three times the mass of Jupiter, it’s a real giant and the undisputed king of its own little corner of space.

Using a wealth of data collected at the W. M. Keck Observatory in Hawaii, a team of astronomers found that the two exoplanets orbiting Kepler-88 that scientists already knew about are in fact joined by a third. The massive new exoplanet completes an orbit of its star every four Earth years, and its orbit is significantly different than the orbits of planets in our home system.

Rather than orbiting in a roughly circular pattern, Kepler-88 d (the name of the new exoplanet, after previous discoveries “b” and “c”) orbits in an elliptical pattern, meaning that it travels far away from its star before coming back and taking a closer pass, then repeats that same trend over and over.

“At three times the mass of Jupiter, Kepler-88 d has likely been even more influential in the history of the Kepler-88 system than the so-called King, Kepler-88 c, which is only one Jupiter mass,” lead author Dr. Lauren Weiss said in a statement. “So maybe Kepler-88 d is the new supreme monarch of this planetary empire—the empress.”

Understanding the complexities of other planetary systems can help astronomers better understand how they form, while also possibly revealing secrets that would apply to our own home system. Space is, well, huge, and no two systems are identical. Learning how massive planets form, how they affect their neighboring planets, and discovering what they’re made of could be very important as we search for neighboring star systems that we may one day try to visit.

Kepler-88 probably won’t be the first on the list of systems we’d try to explore. It’s not that the system isn’t interesting, but at a distance of over 1,250 light-years from Earth, it’s obviously not even something we could consider with current technology.