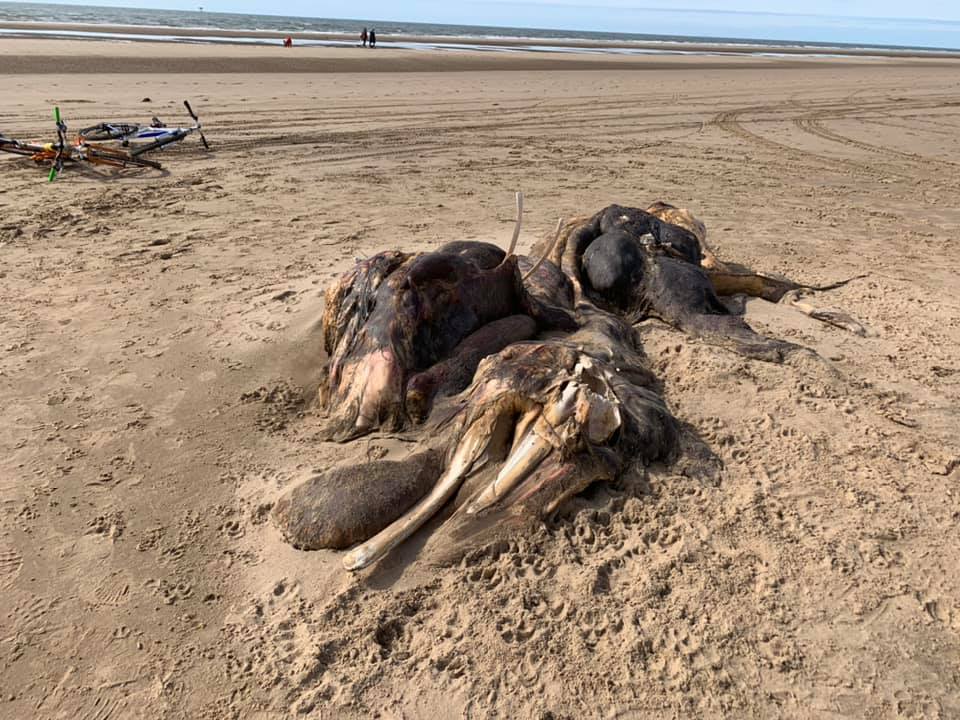 The sea is full of wondrous and unique creatures that come in all shapes and sizes. At some point, the mound of decaying body parts you see above was one of those creatures… but what exactly what is? Nobody seems to know, but there are plenty of theories floating around.

Images of the so-called “sea monster” have flooded social media after they were snapped by a beachgoer in the UK. In the original post by Ainsdale, the location where the creature was discovered, it’s described as having four flippers and measuring approximately 15 feet long. So… what is it?

Due to the animal’s advanced state of decomposition, it’s very difficult to determine exactly what it is. Early guesses ranged from a cow (?) to a whale, to a “sea monster,” but that was before the experts got a chance to take a look at it. As you can see in the images, there are very few identifiable body parts left. Large bones stick out in every direction and the creature has clearly been rotting away for some time.

Speaking with the Echo, Stephen Ayliffe, Senior Advisor at Natural England explained that while they can’t determine the species, experts believe that they know what type of animal it was:

“We can confirm that an animal in a poorly decomposed state has washed up on Ainsdale beach and whilst the identification of the animal is unconfirmed it appears to be a species of whale,” he told the Echo. “We are working with an animal removal company to have the animal’s remains removed from the beach as soon as possible.”

Okay, so it’s probably not a “sea monster” and was simply an unfortunate or ill whale that met its end and washed ashore. That’s a bummer for the poor whale but at least we don’t have to worry about monsters, right?

This is hardly the first time a sea creature has washed ashore, leaving passersby to guess what it was before it died and decomposed. The “sea monster” theory tends to be a popular one. When you see a massive blob of body parts on the beach it’s easy to let your mind wander, I suppose.

In any case, it would appear that the experts have a pretty good handle on what they’re looking at, even if they can’t say for certain what family of whales this unfortunate specimen came from. Or maybe it’s a monster. Maybe.