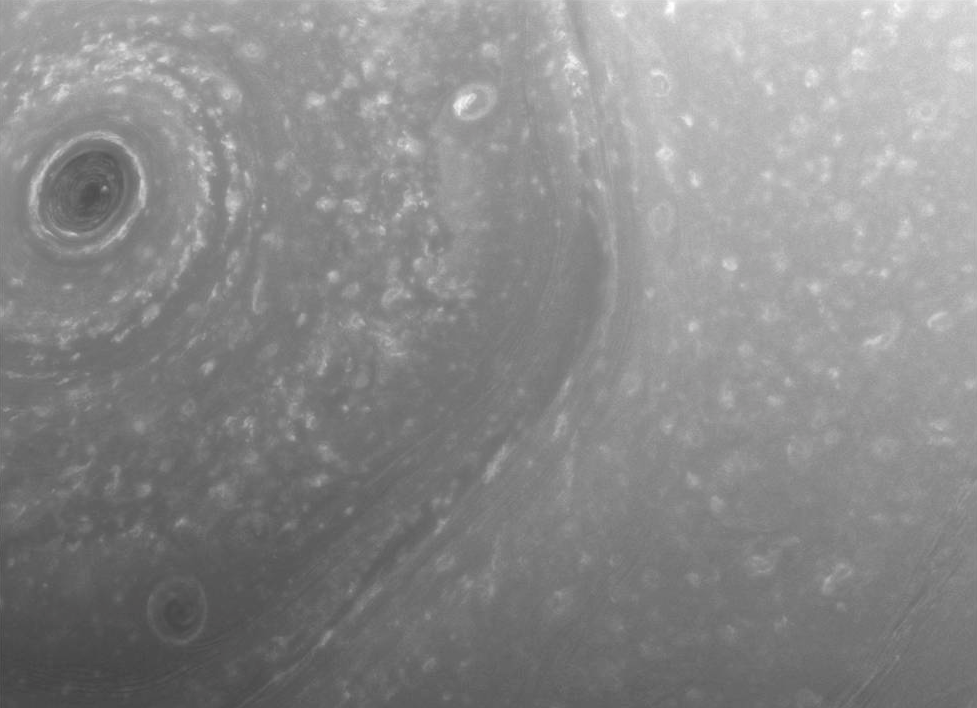 Saturn sure has a thing for peculiar shapes! Astronomers have known for some time that Saturn’s north pole has developed a very odd hexagonal shape. The massive storm swirling there has well-defined sides, and is a near perfect hexagon. It also has a habit of changing color.

Now, using images gathered from the Cassini mission (rest in pieces), a new study reveals that there’s not one, but two massive hexagons swirling on Saturn’s northern half, and the new one is even higher than the other. As LiveScience notes, scientists haven’t figured out if the two are actually connected in any way, but it would be a pretty wild coincidence if they’re not.

“The edges of this newly-found vortex appear to be hexagonal, precisely matching a famous and bizarre hexagonal cloud pattern we see deeper down in Saturn’s atmosphere,” Leigh Fletcher, lead author of the new study published in Nature Communications, explains. “While we did expect to see a vortex of some kind at Saturn’s north pole as it grew warmer, its shape is really surprising. Either a hexagon has spawned spontaneously and identically at two different altitudes, one lower in the clouds and one high in the stratosphere, or the hexagon is in fact a towering structure spanning a vertical range of several hundred kilometres.”

The Cassini spacecraft studied the hexagonal pattern at Saturn’s north pole extensively, snapping multiple images of the feature in various wavelengths of light. These images revealed that the structure of the hexagon stretched deep into the atmosphere, but they weren’t able to show much of how the upper atmosphere was arranged due to temperature limitations of the imaging tools.

Later, the upper atmosphere began to warm up, allowing for new images to be snapped, and those images serve as the foundation for this new investigation.

It’s still unclear whether or not the hexagonal shape which has formed at a higher altitude is a direct result of the one resting below it or not. That might sound silly, but the scientists have plenty of reasons to believe that there’s actually two separate phenomenon at play here. As they note, the dramatic differences in wind speeds should negate any effects propagating upwards, but that may not actually be the case.

“One way that wave ‘information’ can leak upwards is via a process called evanescence, where the strength of a wave decays with height but is just about strong enough to still persist up into the stratosphere,” Fletcher says. “We simply need to know more. It’s quite frustrating that we only discovered this stratospheric hexagon right at the end of Cassini’s lifespan.”