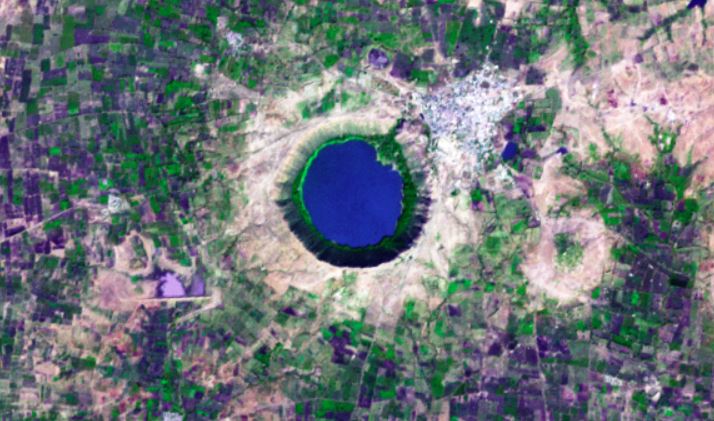 Large bodies of water don’t typically change much over short periods of time. Aside from freezing over in the winter in cooler climates, lakes are typically pretty resilient to change. The iconic Lonar Lake in India is challenging that notion by dramatically shifting its color from a deep green to bright pink in what appears to be a very short period of time.

The color change was so dramatic that the lake, which sits in a massive meteor crater, is now an even bigger tourist destination than it already was. The best part? Scientists don’t know for sure what caused the rapid change in hue.

The lake itself is pretty special, and not just because its existence is linked to a meteorite strike. Its location is fairly remote, and the water in the lake is highly alkaline and also very salty. For decades, the lake was a deep bluish-green color, and visitors stopped because the landscape — specifically the mountainous ring around the edge of the crater — is just plain cool.

“India’s Lonar Crater began causing confusion soon after it was identified in 1823 by a British officer named C.J.E. Alexander,” NASA says of the crater. “Lonar Crater sits inside the Deccan Plateau—a massive plain of volcanic basalt rock leftover from eruptions some 65 million years ago. Its location in this basalt field suggested to some geologists that it was a volcanic crater. Today, however, Lonar Crater is understood to result from a meteorite impact that occurred between 35,000 and 50,000 years ago.”

Small temples constructed over the course of hundreds of years dot the ring of the crater and the lake. As for wildlife, you won’t find much in the lake itself, as the lake is so salty that it prevents fish species from calling it home. It’s an interesting place, and now that some unseen force has completely changed the color of the lake, it’s even more interesting.

When a large body of water changes color, it’s typically linked to changes in the microorganisms that exist there. Scientists haven’t nailed down the cause of Lonar Lake’s color swap, but the most plausible theory seems to be that the lake is enduring a strong algae bloom or perhaps a more dramatic shift in its chemical makeup.

“My hunch is that this lake has periodic pink algal blooms, maybe not unlike alkali lakes in East Africa and even ‘red tides’ in the sea,” James Andrews of AccuWeather explains. “Another possibility – even more speculative as I am not a chemist by trade – is the formation of finely suspended iron oxide, or hydroxide, particles as a result of some kind of chemical or pH change.”

Whatever the case, there will surely be plenty of eyes on the lake to see if it decides to change back, perhaps offering some additional context for its behavior.