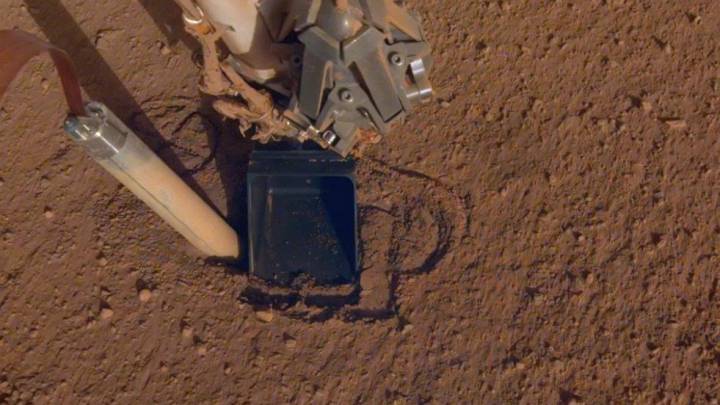 A NASA instrument that has repeatedly failed to accomplish the task it was designed to do may finally be working. The self-hammering “mole” probe attached to the InSight lander on Mars has spent over a year trying and failing to dig into the planet. Now, as SpaceNews reports, it is making progress. Slow progress, but progress nonetheless.

If you haven’t been following the sad, strange saga of the “mole” that is part of NASA’s InSight Mars lander, let me get you up to speed: InSight landed on Mars back in early 2019 and it wasn’t long before the probe (just one of the lander’s many instruments) started to show signs of trouble.

The mole is designed to hammer itself into the surface. It was designed to dig as deep as 16 feet into the planet but came up well short in its first attempts. It seemed the dusty martian soil was just too loose for the probe to get a grip and push itself deeper, so NASA began to try new techniques.

First, the InSight team used the lander’s robotic arm to push against the soil surrounding the hole, hoping that would offer the probe the traction it desperately needed. Results were initially promising, but Mars eventually spat the probe back out and the hole filled with loose soil once more.

The latest technique employed by NASA scientists requires the lander’s arm to actually push on the end of the probe, forcing it into the surface. This approach is incredibly risky because the rear end of the probe is where the cables that attach to the lander are located. Severing those cables would kill the probe and bring a halt to any objectives associated with its function.

However, in a recent live stream that included a group of German scientists that developed the probe, it was revealed that the latest attempt is indeed working… sort of.

The mole can apparently only dig for a little over a centimeter before the lander’s robotic arm has to be adjusted to a new position. That makes the whole process incredibly time consuming and tedious, but at least it’s working. Of course, that’s still no guarantee that the probe will be able to dig deep enough to return the kinds of data that NASA scientists are looking for, and Mars has thrown so many curveballs at the probe already that it’s difficult to remain optimistic.