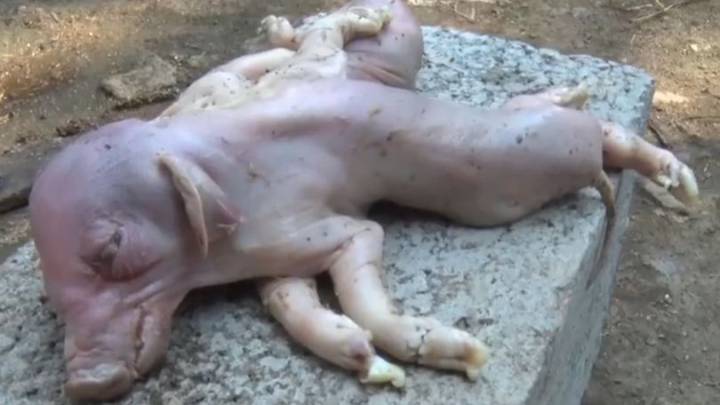 Waking up to news of rogue nations arming themselves with long-range nuclear missiles, nazis marching in the United States, and global warming altering the world’s most vital foods should be more than enough to convince you that humanity is on its last legs, but just in case you needed further evidence, China has you covered. A farmer in China’s Shandong Province oversaw the birth of what can only be described as a beast from another dimension: a two-bodied, eight-legged pig.

Okay, so it’s not a demon, but it’s still a pretty disturbing sight. Rather than being sent to the earthen plane by Satan himself, the “mutant” piglet is likely just the result of a incomplete cellular split that resulted in the animal becoming twins from the neck down, but its birth was enough to alarm and fascinate farmer Gao Baiqi and his fellow villagers.

After its birth, the well-meaning farmer intended to take the struggling piglet aside and feed it by hand, as it was incapable of nursing. Unfortunately, the animal’s condition was simply too dire, and it died just minutes after being born. The deformed infant was then photographed and buried.

Curiously, the would-be twins were actually fully formed with the exception of the head, and Gao claims that two full sets of internal organs were present in the piglet’s dual bodies. However, the animal’s skin was still underdeveloped, hurting the chances that it would have survived much longer even if it had been able to nurse.