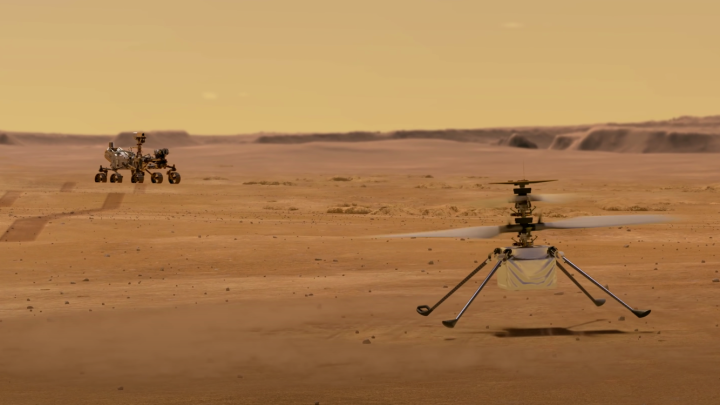 NASA’s Mars Perseverance rover is obviously the star of the Mars 2020 mission. The rover is designed to be the most capable piece of hardware ever sent to the Red Planet and it will have the ability to sample the Martian soil, search for hints of ancient life, and even pack up samples of the soil for eventual return to Earth. We expect years of awesome discoveries to begin once the rover lands in early 2021, but it’s not the only robot making the trip.

The Mars Helicopter is a pint-sized, dual-propeller helicopter that will ride to Mars on the belly of the Perseverance rover. It will be deployed onto the surface after the rover gets its bearings, and NASA just released a great little video showcasing what they expect the helicopter to be capable of.

The first thing to know about the Mars Helicopter is that it doesn’t have any scientific objectives related to Mars exploration. It’s more of a proof of concept than anything else, demonstrating that it’s possible to fly in the incredibly thin Martian atmosphere.

The aircraft will have roughly one Martian month to conduct its tests, and the team believes they’ll be able to squeeze in five flights during that brief window. Each flight will be more taxing than the last, pushing the helicopter to perform greater and greater feats.

The first flight will be a simple up-and-down, testing the aircraft’s most basic flight capabilities. Then, as the team gathers data on its performance, they will send it to greater distances from the rover and then have it return. The key to all of this is that, because there’s no way to control the helicopter in realtime from such a great distance, its movements have to be autonomous, meaning that the helicopter itself will be in charge of navigating the Red Planet’s skies while its engineers eagerly await the outcome on Earth.

If successful, the Mars Helicopter will be the first aircraft humans have ever flown on another world. That’s a pretty huge milestone on its own, but what’s even more exciting is that it could open the door to future missions where rovers are replaced with flying drones capable of covering ground far more rapidly than the relatively slow-moving rovers. Drones that could travel to new areas of a planet quickly could conduct more science in a shorter period of time, and the Mars Helicopter will demonstrate whether such a thing is even possible with current technology.