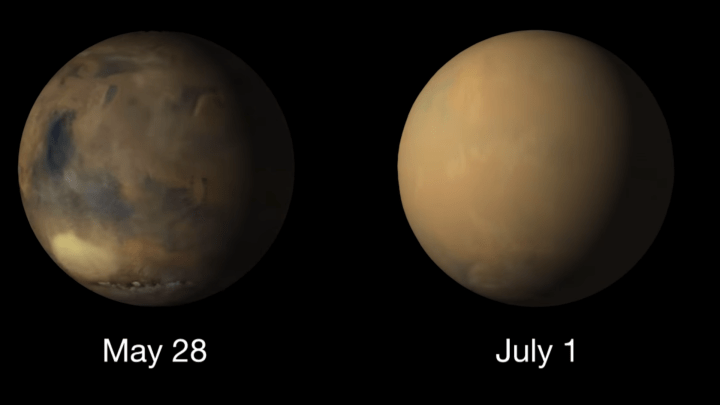 Remember that giant, planet-wide dust storm that sprung up on Mars in late May? Yeah, well, it’s still going on. Initially thought to be a pretty minor dust-up in one isolated region of the planet, the storm has since engulfed the entirety of Mars, and NASA now has a stunning side-by-side movie that demonstrates just how much the storm has changed the planet.

High-speed winds have kicked up so much dust into the atmosphere that Mars no longer looks like a marbled ball of rock with colored bands, but rather a cloudy sphere with near uniform coloring all around. It’s really, really wild.

I mean just look at that thing. NASA knows that these kinds of planet-spanning storms do happen on occasion — typically every six to eight Earth years — but still have very little clue as to how they are caused. Things like this just don’t happen here on Earth, so it’s taking the scientific community a while to really wrap their heads around it.

“The very fact that you can start with something that’s a local storm, no bigger than a small [US] state, and then trigger something that raises more dust and produces a haze that covers almost the entire planet is remarkable,” Rich Zurek, a project scientist who works with the Mars Reconnaissance Orbiter, notes.

This is one seriously big dust storm we’re talking about, and after seeing these images it’s no wonder NASA’s Opportunity rover has been forced to sit dormant and wait for it to calm down. The aging robot has been in a low-power preservation mode for weeks now, only waking up every so often to check its power levels and monitor the amount of sunlight hitting its solar panels.

NASA is continuing to monitor the storm as best as they can, but there’s really no telling how long it will be before things start to calm down. It could be weeks to months before the skies clear again, and we won’t know of Opportunity’s fate until the Sun can reach the planet’s surface once again.