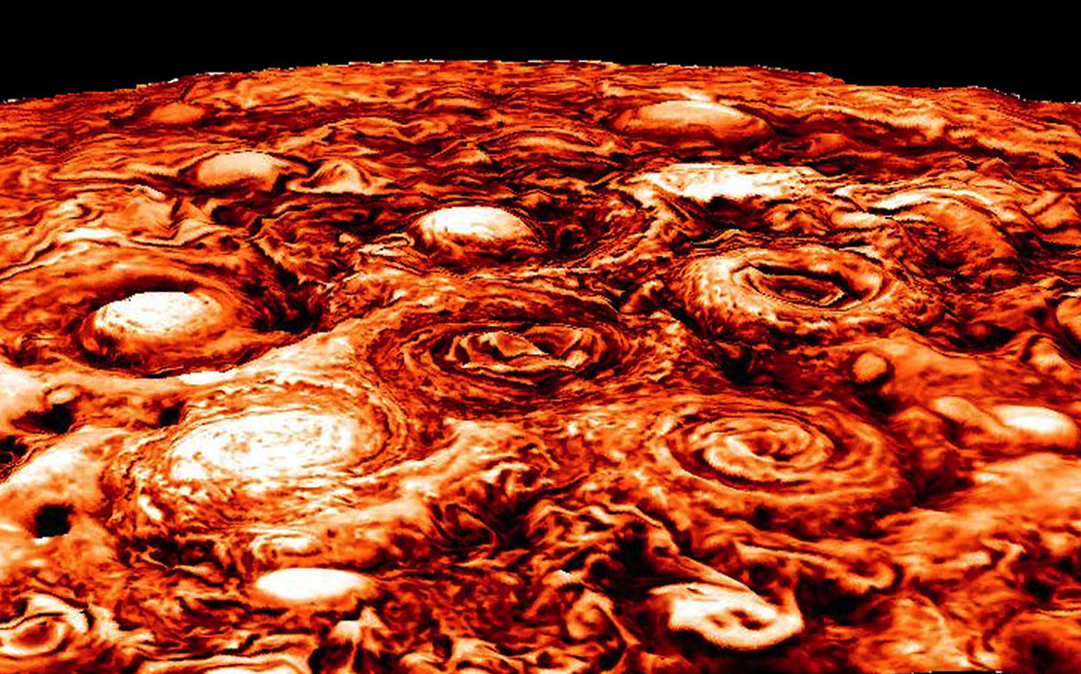 Back in early March, NASA released some really stunning images that the Juno probe captured of Jupiter’s poles. The pictures were created using the spacecraft’s infrared sensor, which allowed it to see the underlying structure of the massive cyclones that cover the planet. These huge towers of wind were scary enough in the still images, but now NASA has taken the data and created a 3D “flyover” video of the turbulent atmosphere, and it’s even more frightening.

NASA has been closely studying the weather patterns on Jupiter in an attempt to learn more about what powers its massive storms. Late last year, the Juno spacecraft provided some incredible insight into the workings of the Great Red Spot, revealing that it stretches hundreds of miles into the planet, and these new images are a continuation of that research.

“In this animation the viewer is taken low over Jupiter’s north pole to illustrate the 3-D aspects of the region’s central cyclone and the eight cyclones that encircle it.” NASA says of the video. “The movie utilizes imagery derived from data collected by the Jovian Infrared Auroral Mapper (JIRAM) instrument aboard NASA’s Juno mission during its fourth pass over the massive planet. Infrared cameras are used to sense the temperature of Jupiter’s atmosphere and provide insight into how the powerful cyclones at Jupiter’s poles work.”

The flyover does a good job at revealing the scale of the storms, and the massive valleys in the clouds glow brightly thanks to the heat mapping that Juno has provided. “In the animation, the yellow areas are warmer (or deeper into Jupiter’s atmosphere) and the dark areas are colder (or higher up in Jupiter’s atmosphere). In this picture the highest “brightness temperature” is around 260K (about -13°C) and the lowest around 190K (about -83°C).”

Even as large as these storms systems are, it’s important to remember that the actual “weather layer” of Jupiter accounts for just one percent of the entire planet’s mass, so what we see from space is hiding an incredible amount of material tucked away below. Juno’s tools can only cut away so much of the cloud cover, but what it has managed to capture is obviously pretty awesome.