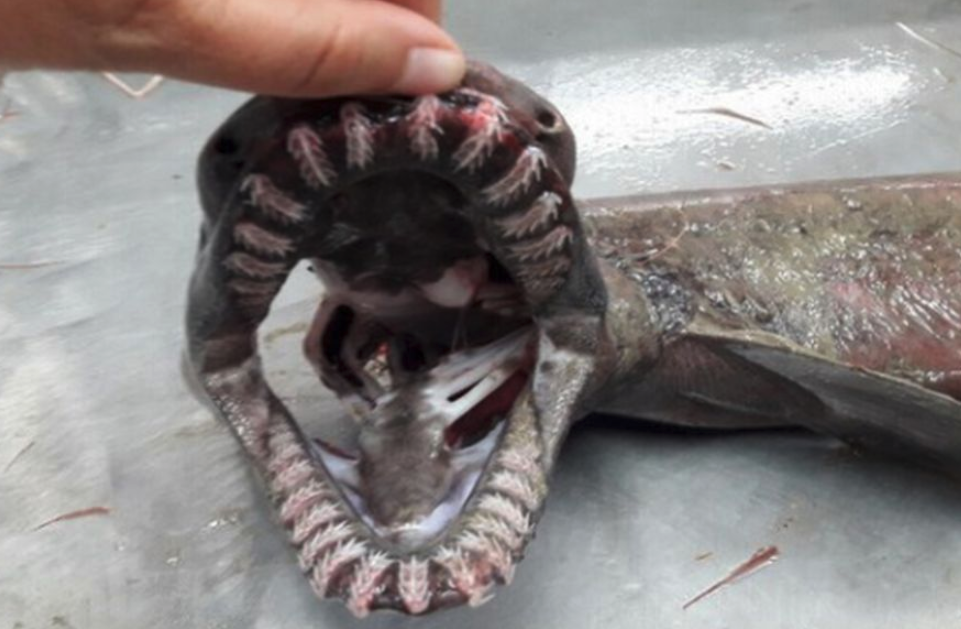 When the dinosaur-killing asteroid struck the Earth many millions of years ago it spelled doom for countless species, while allowing many others (like mammals) the chance to come out of hiding and gain dominance. However, some creatures were able to carry on largely unaffected by the trauma the space rock wrought, and some even still exist today. The frilled shark is one of those rare animals, and a fishing trawler accidentally snagged one of the very few specimens ever seen by human eyes.

The animal, which was snagged off the coast of Portugal, is considered a “living fossil” by scientists because the species is thought to have remained largely unchanged for the past 80 million years. After it was caught, the commercial fishermen reported their strange catch and the creature was transferred to a research vessel where scientists examined it.

According to the fishermen, the beast measured an impressive five feet in length and had been hauled in from a depth of around 2,300 feet. The odd sharks are thought to live at extreme depths, and have been caught as far as 5,150 feet, which is the primary reason humans very rarely encounter them. Old tales of sailors encountering “sea serpents” may have been inspired by the occasional spotting of the animals, but there’s really no way of knowing.

That’s not necessarily a bad thing, as the frilled shark is a pretty frightening creature to see. With a long, snake-like body, it hunts by lunging at its prey and snagging them with its rows of needle-like teeth. It has never been observed hunting at depths that would lead it to a face-to-face run-in with human divers, but with 80 million years of experience under its belt, the species most certainly knows how to make short work of its prey.

Researchers will take this rare opportunity to learn more about the frilled shark, as so little study has been done. The elusive species may date back to the time of the dinosaurs, but there’s still plenty it can teach us about how animals live and coexist in the dark depths of the oceans.